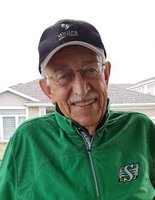 In a four-page autobiography written in his early twenties, Robert Joseph Bibian Elphege Gilmour reflected on his youth and how he cared for his younger brother, Richard, before and after school while his single mother earned a living. He collected stamps, built model airplanes and had the technical know-how to build radios. The highlight of his young life was his involvement in the Boy Scouts. “Camping and hiking were regular occurrences in my youth and at the age of sixteen I took charge of a Scout Camp for a ten day period. Winter camping has always held a great adventure in my mind and when the Scout Winter Camping badge came out I was one of the first Scouts to receive it.”  Robert was honoured to attend several Canadian Jamborees, once as Assistant Scoutmaster and in 1951 he was one of two scouts selected from Saskatchewan to attend the World Jamboree in Austria. He wrote his autobiography at an age where he was unaware of what would unfold in the next sixty-plus years; the love of his life, whom he would meet in 1955 and would woo with gifts and love letters until she agreed to marry him in 1959; the three beautiful daughters he would raise and proudly attend every music recital, dance performance, and basketball game. Robert was bestowed the noble title of “papa” ten jubilant times and “great-papa” six times. A career with the bank meant that his family moved regularly throughout Saskatchewan and Alberta. He eventually transitioned to a successful career in life insurance, becoming a top-tier salesman earning trips around the world. Robert was always an active member of his church and local Rotary Clubs and was a gifted bass soloist. He was welcomed into heaven by his mother Christine; grandson Jeremy; and son-in-law Barry. Bob will be lovingly remembered and missed by his wife, Lois; daughters Shelley (Michael), Susan (Murray), and Jody (Scott); grandchildren David (Cesia), Stephanie, Landon (Emily), Zachary (Arantza), Arlin (Victory), Aniko (Wes), Seren (Tye), Eli and Cayle; and great-grandchildren Aliyah, Callie, Archer, Celeste, Lyla and Ander; brothers Richard and Bruce; his canine companion Molly; and a great number of friends and colleagues. He’ll be remembered for his love of travel, camping and the outdoors, his innate sense of style, always being the last at the dinner table, his pool game and crafting tiny paper airplanes with his grandchildren. A celebration of his life will be live-streamed on Sunday, January 10 at 3:30 p.m. To view the livestream of the service please click on the link to Speers TV at the top of Robert’s Tribute Page. In lieu of flowers, our family is sponsoring a Syrian refugee family’s journey to Canada. Cheques can be made payable to St. Mark's Lutheran Church – Syrian Refugee Fund and forwarded to: Pastor Craig Moeller - St. Mark's Lutheran Church 3510 Queen Street Regina SK S4S 2G2.