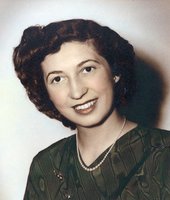 Olga Molnar passed away peacefully on Sunday, February 21, 2021 at the Gardiner Point Care Home in Regina. She was 91 years old. Olga was born on April 27th, 1929. She was the daughter of Zoltan and Teresa Soos and was raised on a small mixed farming homestead in the Hnausa-Riverton district in Manitoba. Her mom and dad arrived in Canada from Hungary in 1925.

Olga had vivid and fond memories of growing up on the farm. Their house was a loving house - Zoltan was outgoing and enjoyed to sing and entertain and Teresa was a wonderful cook and a gracious hostess. Olga and her sister Irene attended Hnausa school and would walk the two mile trek daily in sun, rain, snow and bitterly cold weather.

In 1952 Olga married Nicholas Joseph (Nick) Molnar and moved to Yorkton, Saskatchewan where they proudly welcomed and lovingly raised five children. Olga’s bright creative spirit shone in her many hobbies, interests and talents including gardening, antique collecting, sewing, quilting, knitting, painting, stitchery, ceramics, crafting, baking, and furniture refinishing. She also generously contributed her talents to her community through her involvement with the Catholic Women’s League of Canada, the Quilters Guild and the Yorkton Exhibition Association where she was inducted into the Senate in 1998. Her gardening expertise was  recognized by the Yorkton Horticultural Society and her talents in stitchery led to her serving as a Judge with the Local Fair Ladies Auxiliary.

Olga was closely connected to her faith. Her love of Angels and appreciation for all God’s creation was evident. She was blessed with loving friends and many relatives, nieces, nephews and two special godchildren which she greatly cherished and shared so much of her life with. Her home was a lively, warm and welcoming oasis. One of her passions, along with garage sales, was collecting rocks, driftwood and shells from her various travels. After the heartbreaking passing of her beloved husband Nick in 1998, Olga continued to reside in Yorkton until 2012 when she moved to College Park Retirement Residence in Regina.

Olga’s legacy and spirit lives on in her children, grandchildren and great grandchildren. There is a debt of gratitude owing for her strength, determination, resourcefulness, intelligence and faith. She has created and inspired a precious family bond which her children will honour, uphold and nurture forever.

A private family mass will be held at Christ the King Church in Regina on Wednesday, February 24, 2021 at 11:00 a.m. To view the livestream of the service, please click the link above. Interment to follow at a later date, in the Yorkton City Cemetery.