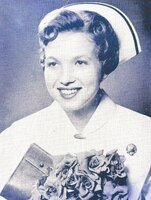 Anita J Wagman passed away on December 1, 2021. She was born to Frank and Helen Polasek on their farm in Dysart, Saskatchewan on August 3, 1936. She attended Gardner Elementary School in Dysart and when it was time for her to go to High School, her family moved to Regina where she attended Sacred Heart Academy, graduating in 1955. Anita then enrolled in the School of nursing at the Grey Nuns Hospital and she graduated from there in 1958. After graduation, she went to work at the Grey Nuns in the operating room, and she married her husband Fred in 1959. They had two children, Lisa (Randy) Clarke and Troy (Bonnie) Wagman.

Anita’s pride and joy was her granddaughter Kyla. Grandma loved shopping for her and always had a genuine interest in all her activities. Prior to the arrival of Lisa in 1963, Anita worked for Doctors McEwan and Black at the Medical and Dental building. Then she became a full time mom until Troy arrived in 1966. Following this, she worked part-time and casual at the Grey Nuns in the operating room. In 1974, with the opening of the Plains Health Centre, she was asked to join the staff there until her retirement in 1995. Her love for nursing continued and she began working as a volunteer for the Palliative Care Unit at the Pasqua Hospital, something she thoroughly enjoyed.

Anita was predeceased by her mother and father; her mother and father in-law Alec and Bell Wagman; along with her brother Jerry from Kelowna and brother in-law Glen Wagman. In addition to her immediate family, Anita leaves to celebrate her life, a sister Maddie (Harris) Wheeler in Powell River, BC, sister Noella (Greg) Selinger in Regina, sister-in-law Carol Polasek in Kelowna, and many nieces and nephews.

Anita was diagnosed with Multiple Sclerosis in 1994 and for the rest of her life though she struggled at times, she never let it get the best of her. Her nursing background, her strong will and determination, and her “let’s get on with it” attitude, all helped her deal with this problem on a daily basis. She will be remembered by those whose lives she touched.

A Mass and Reception will be held at a later date.