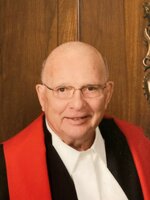 The Honourable C. Ross Wimmer passed away on Wednesday, April 20, 2022. Ross was born in Kamsack and grew up in Saskatoon. Ross will be lovingly remembered by his wife, Joan, six children and four grandchildren: Karl (Elin) of Geneva, Chris (Lianne) and Jeffrey of Regina, Carla and Ross of Vancouver Island, and Cathy of Calgary, grandchildren Steven and Christopher (children of Chris and Gina), Gregory and Sarah (children of Ross and Sandra).

Ross was President of the Regina Bar Association in 1975 and a Bencher of the Law Society of Saskatchewan from 1972 until his appointment to the Bench. As a Bencher, he served one term as a Chairman of the Discipline Committee. Between 1974 and 1976 he served on a Federal Commission of Inquiry into Public Complaints, Internal Discipline, and Grievance Procedures within the Royal Canadian Mounted Police. He received a Queen’s Counsel appointment in 1975.

After being appointed to the Bench, he taught for two years as a Sessional Lecturer in Professional Responsibilities at the University of Saskatchewan, College of Law. In 1983 – 1987 he was Chairman of the Federal Electoral Boundaries Commission for Saskatchewan.

As per Ross’ wishes, no funeral service will be held.

The family would like to thank Riverbend Crossing and Broadway Terrace for their compassion and care for Ross.