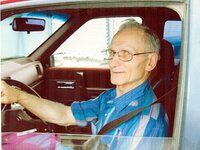 George Cozma passed away peacefully at Regina General Hospital, on Wednesday, June 1, 2022 at the age of 88 years. He was born on December 24, 1933 at Kayville, SK. George was predeceased by his father and mother, Fritz and Ann (Morse); and siblings, Nick, John, Danny, Lena, Mary, Peter, Eli, and Elaine; first wife Victoria “Vicky” Minto and second wife Barbara (Daley) Lysick. He will be missed by several nephews and nieces; housekeeper Ilenna Hepworth; and lots of coffee friends. George farmed two miles east and one and a half miles south of Kayville, SK. He bought five quarters of land from his dad in 1967. Due to health reasons, the land was sold in 1974 and moved to Regina, SK. He was employed by BACM, hauling gravel with his own gravel truck. George did various jobs with his own truck. He married Barbara (Daley) Lysick from Pembroke, ON in 1986. She passed away June 12, 2015. George enjoyed playing baseball and hockey, farming, and enjoyed going out for coffee at various locations, meeting people. George was kind to everyone. He liked joking around and helping people out. The family would like to thank the staff at the Regina General Hospital for taking care of George. Funeral Service will be held at Speers Funeral Chapel, 2136 College Avenue, Regina, SK on Friday, June 10, 2022 at 10:00 a.m.