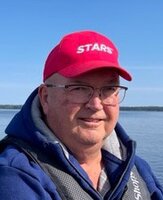 Kevin passed away June 17, 2022 at the age of 66 at his home in Sorensen Beach. He was predeceased by his parents Alvin and Irene and brother Dale; his mother-in-law and father-in-law Walter and Frieda Eichorst and brother-in-law Bill Eichorst. Kevin will be missed by his wife Elizabeth; sisters-in-law Yvonne, Kathy and Leah (John); half-brothers Leroy and Doug and many nieces and nephews. Kevin was born on July 1, 1955 in Moose Jaw and raised on the family farm near Duval, Saskatchewan and took his schooling in Duval and Strasbourg.

In 1992 he met Elizabeth Eichorst on a blind date arranged by a mutual friend. On their dinner date, they were surprised at the long line-ups at the restaurant. Neither of them realized it was Valentine’s Day. That sealed their relationship and they were married that same year. While Kevin always said he was farming since the day he could walk, he and Dale worked together with their father on the farm until his passing. When Kevin and Dale assumed control of the family farm they expanded it into a large grain enterprise. For relaxation Kevin and Elizabeth spent their time at Sorensen Beach and in 2007 they built their retirement home at the Lake and moved there permanently in 2012. Kevin and Dale sold the operation and retired in 2013.

Kevin was community minded and had close relationship with many relatives, neighbours, and friends who, throughout his life, became like brothers – you know who you are. For a number of years, he and Elizabeth enjoyed their winter home in Florida and travel excursions to many parts of Canada, USA, an

d Iceland where they made lasting friendships with fellow travelers. Those who knew Kevin will attest to his willingness to go above and beyond helping those in need. He enjoyed watching things grow and since he was retired from the farm, he focused his interests on gardening. Kevin was also very proficient in the kitchen and took pride in sharing his baking and cooking accomplishments with his neighbours at the Lake and his good friends back on the farm. He always carried candies in his pockets for visits with his great nieces and nephews. Because of the complexity of the Sorensen enterprise, Kevin was an excellent source of operational information and his neighbour often said he had a PhD Degree in life skills and common sense. Kevin faced a number of medical challenges, and during the last few months as his health declined, he kept in close touch with family and friends via phone and social media. Elizabeth would like to thank Dr. Prasad for his support in recent years. A celebration of life will be held at the Strasbourg Lower Hall, 113 Pearson Street, Strasbourg, SK on Monday, August 8, 2022 at 2:00 p.m. A livestream recording of the service will be available at a later date. In lieu of flowers, donations in memory of Kevin may be made to the Hospitals of Regina Foundation, 225-1874 Scarth Street, Regina, SK S4P 9Z9.