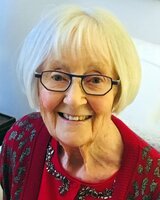 Doreen overcame the loss of both parents as a young child in England to serve in the British Army in World War II, married two gallant military men, and raised five children in England, Austria, Cyprus, Egypt, Hong Kong, and Canada. Always elegant, poised and inclusive, Doreen read widely and voraciously, painted landscape and still life, was a gifted seamstress and knitter, and earned her real estate license. She enjoyed theatre, symphony, gin and tonics, games of Scrabble, dogs and making her delicious Welsh cakes for family and friends. For years Doreen would start her day quickly completing the Globe and Mail cryptic crossword. She was thrilled when she had the honour of meeting the Pope and members of the royal family. Doreen died peacefully on Sunday, July 3, 2022, at the age of 99 years in Regina, SK. She was a loving and devoted mother to her children and Nana to her grandchildren and great-grandchildren. Doreen (nee Boothby) was born on June 8, 1923, in Hull, Yorkshire UK. Her parents, who owned a pub, died before she was four years old. Doreen overcame a difficult childhood as an orphan with an independent spirit and resilience that she exhibited throughout her life. During World War II she served with the RAMC in England from 1942 to 1946. Her first marriage in 1943 to RAMC Staff Sergeant John Hirst ended tragically with his death six months later while on duty in Palestine. After the war, Doreen was courted by Jack McLaughlin, a British Army medical doctor and survivor of Japanese POW camps. They met at a dance, and lacking paper and pen, Doreen wrote her phone number and address in lipstick on his silver cigarette case. They married in 1946 and began raising a family in various foreign postings. She and Jack returned to England in 1958 and immigrated to Canada with their five children in September 1960 sailing on the Cunard Ivernia from Southampton to Montreal. Their arrival was captured by a photographer while the family was on the ship and the photo was on the front page of the Montreal Star the next day. After a long train ride, they arrived in Regina to begin their new life in Canada. On their first evening in Regina, upon inquiring directions to downtown, they were told “this is downtown”.  After the initial culture shock and a cold first Canadian winter, Doreen embraced her new home in Canada making many lifelong friends. After Jack’s death in 1982 she led a busy, active life enjoying and maintaining her many interests. Doreen is lovingly remembered by her five children: Veronica (Phil Holden), Moya, John (Helen), Liz (Gary Lane) and Glennie (Clyde Graham); grandchildren: Sean (Rebecca), Sarah (Stu), Alyssa (Devin), Moya (Josh), Caitlin (Scott), Glennie (Luke), Annie, William (Ellen) and Meagan (Grant); and great-grandchildren: Jack, Sean, Celia, Austin, Elena, Arlo, Alexandra, Chloe, Grace, Lawrence, Lydia, twin boys who arrived on Wednesday of this week, and another baby due in August! The family thanks Dr. Stewart McMillan for his exceptional care and long-time friendship, and the wonderfully caring staff at Wintergreene and Harbor Landing Village. In memory of Doreen, donations to JDRF - National Support Office, Suite 600 - 235 Yorkland Blvd., Toronto, ON M2J 4Y8, The Canadian Mental Health Association, 1810 Albert Street, Regina, SK, S4P 2S8, or The Hospitals of Regina Foundation, #225 - 1874 Scarth Street, Regina SK S4P 4B3, directing donations to the NICU at the Regina General Hospital would be appreciated. Celebration of Doreen’s Life will be held at Christ The King Roman Catholic Parish, 3239 Garnet Street, Regina, SK, on Saturday, September 24, 2022 at 11:00 a.m.