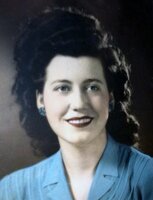 Eleanor was born in the Limerick area in 1926 to Mihia and Maria Mazepuik, one of 8 children, with one sister and 6 brothers: Anne, Dan, George, Nick, Bill, Lorne, and Johnny (Mayes brothers). She attended Milton School in the Limerick area. During her earlier years, Eleanor enjoyed helping her mother with the cooking and baking for the family. On the advice of her brothers, she took a business course in Assiniboia to further her education.  After completing the course, she moved to Regina and wrote Provincial Tests and became an employee of the Government of Saskatchewan, working in the Dept. of Municipal Affairs. At the time, the Premier was Tommy Douglas. She later applied and was accepted to fill a position in Saskatoon with the Sask. Dept. Labour. Eleanor returned to Regina after she became engaged to George.

Over the years, her hobbies included sewing and doing crafts which she enjoyed very much. Eleanor also enjoyed sports, participating in a women’s provincial traveling fastball league in 1946-1947. Other sports she enjoyed were bowling and golf.  Eleanor also enjoyed her spending time in her garden and looked forward to picking out flowers to plant every spring.

On October 1st, 1949, Eleanor married George in the smaller original St. George Orthodox Church in a beautiful ceremony that was conducted by Fr. Simeon Ivanoff and Fr. Peter Avram. George and Eleanor were married for 64 years before George’s passing in 2014.

After their marriage, Eleanor worked for various lawyers, accountants, and a Welsh machinery company as a stenographer. She spent about 5 months in the hospital flat on her back until her son, Kenneth, was born on August 23, 1957. Eleanor then took on the role of a stay-at-home Mom. This was an exciting time for them, and they enjoyed their family so much. On a sad note, on April 1st, 1964 their little girl, Mary, was born but lived for only 1 hour.

1960 was an exciting time for Eleanor as George was sent to Italy for training for 3 months and then Eleanor joined him for the last 7 weeks.  This kindled their love of travel together, and they took several opportunities to travel across Canada and to different parts of the United States.

Later, Eleanor wrote Federal Tests and worked with the R.C.M.P “F” Division Headquarters in the Personnel Department. During her time there, she took classes at the University of Regina and received her Certificate in Personnel Administration in May 1978. Eleanor retired in 1987 from that position after 17 years of service.  Upon retirement, Eleanor spent her time looking after her grandchildren. Family and friends were always important to Eleanor, and no visit by a brother or sister passed without a full banquet meal.
Eleanor suffered 3 strokes and heart surgery in 2008. She came home from hospitals in June 2009, and George was her primary caregiver until his passing.  Eleanor moved into The Salvation Army’s William Booth Special Care Home in February 2015 as a long-term Care resident. She enjoyed all the staff and made it her home, getting involved in many of the activities planned for the residents.  Another stroke in February 2022 was debilitating and resulted in the loss of function of her right arm, which prevented her from enjoying many of the crafts she had been able to do previously.

At William Booth, Eleanor made sure everyone who visited her there saw the latest pictures that her family had sent. She was especially proud of the achievements of her grandchildren and great grandchildren.

We are thankful for the staff as William Booth for their compassion and care given to Eleanor during her stay. Of special note, we would like to thank the Chaplin, Major Sharon, for taking the time to spend talking on a regular basis with my mother as she enjoyed the visit immensely.

COVID robbed us of two years together, but the recreation staff helped ease the situation by setting up regular weekly FaceTime calls for Eleanor with distant family members.

In closing the following words had deep meaning for Eleanor.

“And now abide faith, hope, love, these three,
But the greatest of these is love.”
1 Corinthians 13:13