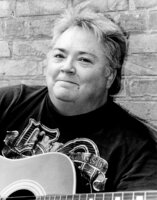 Molly was born November 5, 1953 the fourth of five children of the Hegan clan. She grew up in Melville, Saskatchewan where her musical talents were quickly recognized by many choir directors of her youth. Early appreciation of her talent was shown when she, guitar in hand, sang at her Grade 12 Commencement Program. Molly was a banker by profession but a musician by passion. She spent over 30 years working for the Credit Union and Bank of Nova Scotia in Melville and Regina. Upon retirement from her banking career Molly chose to devote her time to developing and improving her musical life. She was an accomplished musician and played a minimum of 7 instruments. Her Royal Conservatory training gave her the skills to compose and arrange many pieces, much to the delight of her audiences, especially those in the many nursing homes she visited with her bands. She played with the Regina Mandolin Orchestra for many years, taught beginner mandolin lessons and worked with a program that had inner city school children learn how to play the mandolin. Her talents as a teacher were greatly appreciated.  Along the way Molly played with many bands. Her first was a Cajun band called “Louisiana Jane” where she was guitarist, arranger, composer and vocalist. Then followed “Shepherd’s Band” and “String Bean”. While still working Molly was able to cut her own CD featuring her own compositions and arrangements. This CD received air play on CBC radio in Canada and abroad. For a few years she performed under her own name as “Maximum 1 KMH”. Many family Christmas concerts were arranged by Molly featuring the talents of her nephews as well as her lovely alto voice. Molly could harmonize with anyone. She sang with the Molson Choir, the Philharmonic Chorus, Saskatchewan Choral Federation as well as Prairie Pride Chorus and performed at Telemiracle. She was a valuable asset to the numerous choir camps she attended as a counsellor. Many campers remembered being lulled to sleep by Molly’s guitar and vocals. She joined the Big Sisters organization and stayed in contact with 7 of the women who became close friends.

She was predeceased by her parents Kay and George Hegan and all her brothers Michael, Timothy and Sean. She is survived by her only sister Pat, sisters-in-law (Sue and Jude), nephews Ryan, Kieran (Rebecca), Regan (Christine), Konnor, Kailan and nieces Sarah and Danni. The angel choir has a new alto.