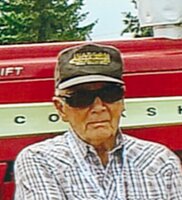 Carl William Bonkowski, late Craven, SK, passed away peacefully on Saturday, July 30, 2022, at the age of 89 years. Predeceased by his beloved wife Evelyn; parents Adolf and Pauline; and brothers Richard and Max. Carl is survived by son David of Craven; daughter Cathy (Marty) of Craven; sister Hilda of Saskatoon, SK; brother John of Kipling, SK; as well as numerous nieces and nephews. Carl was a very hard-working man all his life. He worked road construction in the 50’s and 60’s running large earth moving machines Euclid/Terex, TS 14 and TS 24’s which assisted building many roads and highways in SK, AB, and BC. Carl later went to work as the Heavy-Duty Diesel Mechanic for all these machines until he retired. He and Evelyn purchased a quarter section of land north of Regina which turned his career to “Farmer” after that. Carl’s love of raising cattle, driving and restoring tractors (especially diesel), and haying the land continued until his illness with cancer in June. Dave, Cathy, and Marty all live at the family farm and will continue on with the love of farm life! At Carl’s request there will be no Funeral Service. A private interment for immediate family will be held at a later date. Family and friends so wishing may make donations, in memoriam, to the Regina Humane Society, 79 Armour Road, RM of Sherwood, SK S4K 0A8.