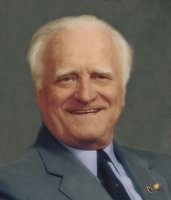 WINFRIED SCHLOSSER February 11, 1935 - July 28, 2014 Winfried passed away on Monday July 28, 2014 at the age of 79. He was predeceased by his parents, Frieda and Walter; his brother Juergen; brother-in-law Willi; and daughter-in-law Peggy. Winfried immigrated to Canada from his home in Germany in 1954 and worked most of his life in construction. He had a partnership with Ross Keith in Nicor construction for sixteen years prior to his retirement and worked on many buildings in Regina. Winfried was proud of his German heritage and was a founding member of the German Canadian Society Harmonie, spent seven years as president of the society and became honorary president in 1987. He was also a founding member of the Mardi Gras Society (Karnevalsgesellschaft) and remained very active in it, even becoming a senator in the festive organization. His hard work and dedication was honoured through a special medal awarded by the German Karnevals Bund, and honours from the German Canadian Congress and the Saskatchewan German Council for his outstanding work in promoting German culture here in Regina. Winfried was also very proud of his Canadian citizenship and was awarded the German Canadian Friendship award from the Federal Republic of Germany. With his outgoing and friendly personality, Winfried created lifelong friendships, warmth and joy with whomever he met. Winfried is much beloved by his surviving relatives, his loving wife Stephanie; his son Michael (Karen) Schlosser; grandchildren, Christopher and Brittany (Steve) Fritsch; his daughter Carmen (David) Knaus; grandchild Caitlin (Dennis); great-grandson Luca; grandchildren, Railin, Ryan and Samantha; son John (Glena) Gustin; grandson Jeremy (Amber) Gustin; daughter Mary (Brian) Sali; and grandson Matthew. He is also survived by his siblings, Gisela Tritschler of Germany, Christa (Viktor) Hamann of Vancouver and sister-in-law Susi Schlosser of Germany as well as many nieces, nephews and cousins here in Canada as well as in his native Germany. A Memorial Service will be held at Trinity Evangelical Lutheran Church, 1909 Ottawa Street, Regina, SK on Sunday, August 3, 2014 at 2:00 p.m. where Winfried had been a long time member. Interment will follow at a later date. In lieu of flowers, donations may be made to the German Canadian Society, 1727 St. John Street, Regina, SK, S4P 1R8 or to Trinity Evangelical Lutheran Church, 1909 Ottawa Street, Regina, SK, S4P 1P7.