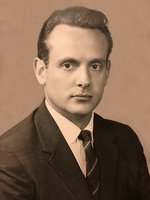 Dr. Eduardo Alvarez’s story begins in a small village in northern Spain called Rio Aller in the province of Asturias. Small, brightly painted homes and the pillared wooden hórreos typical to this region are nestled together beneath rocky climbs blanketed by apple and chestnut trees. This is where Eduardo was born in 1929 and raised. He would tend to the land that had been in his family for generations, alongside his older sisters (predeceased), Victoria Alvarez Bigotes and Anita Alvarez Bigotes, and assist his parents (predeceased), Maria Alvarez Bigotes and Eduardo Alvarez Diaz, by taking the cattle out to pasture. Nothing about this childhood or these modest beginnings suggested that he would go on to distant countries to accomplish so much. The impossibility of a life beyond the pastures of Aller seemed confirmed when his elementary school teacher told his mother that he would never amount to much. His parents’ investments, he insisted, should be placed in Eduardo’s sister, Victoria, who had much more academic potential. But Victoria would have none of that. Victoria takes full credit for Eduardo’s achievements, made possible by her midnight escape out the window of her school residence, which shifted his parents’ attention resignedly to Eduardo’s education. The journey that would take Eduardo from this quiet rural region in northern Spain to Regina, Saskatchewan where he settled with his wife Rosario, raising his four children, Maria, Anita, Eduardo, and Natalie, is one that his family is still retracing.

After completing his medical training in the Faculty of Medicine at the University of Valladolid, Spain, he served as a general practitioner in the municipality of Caravia, Asturias where he travelled the roads that ran along the edges of the Bay of Biscay on his motorbike. But contact with an uncle in Canton, Ohio and the prospect of medical residencies in the US would take him away from this beautiful coastal town by boat over the Atlantic two years later. With limited English, he thrived during his residency in surgery at Canton’s Timken-Mercy Hospital from 1955 to 1957. He went on to complete a one-year residency in urology at Allegheny General Hospital in Pittsburgh, Pennsylvania, followed by a placement as senior assistant resident in surgery at Johnston-Willis Hospital in Richmond, Virginia from 1958 to 1959 and Trumbull Memorial Hospital from 1959 to 1960. His most fondly remembered residency took place at Henry Ford Hospital in Detroit, Michigan, where he completed two years in plastic and reconstructive surgery under the supervision of Dr. Alex P. Kelly, whom he admired deeply. With over 18 years of medical training and several residencies under his belt, Eduardo successfully completed the American Medical Qualification Examination for foreign medical graduates in 1960. He returned to Oviedo, the capital of Asturias, shortly thereafter where he won the first national competitive examination to obtain the position of Chief of Plastic and Reconstructive Surgery at the General Hospital of Asturias in 1963. His oral defense, according to committee member Dr. Vicente Vallina, left the examiners speechless.

It was in Oviedo where Eduardo met his wife Rosario, who fell in love with this good-looking surgeon newly returned from the US. She and her girlfriends referred to him as a “chulo”: he was cocky, had a magnetic personality, and seemed very aware that women found him easy on the eyes. Rosario also noticed that his pastime as a fairly skilled soccer player gave him a nice pair of legs. Rosario captured Eduardo’s heart by her ability to sing the complex melodic lines of Asturiano folksongs or tonada asturiana, which he adored. They married and immigrated to St. John’s, Newfoundland in 1963 where their first daughter, Maria, was born. Shortly after arriving in Canada, Eduardo completed his examinations for the Licentiate of the Medical Council of Canada, Fellowship in the Royal College of Surgeons of Canada, and the American Board of Surgery, all in 1964. An opportunity presented itself to establish his practice in Regina, Saskatchewan, which was, at the time, in desperate need of an additional plastic and reconstructive surgeon to join Dr. Jan P. Szlazak. In 1974, he was appointed Assistant Clinical Professor of Surgery at the University of Saskatchewan. He established the burn unit at Regina’s General Hospital where he became Head of the Section of Plastic Surgery in the Department of Surgery in 1975. The following year, he became Head of Plastic Surgery at the University of Saskatchewan’s teaching hospital in Regina, the Plains Health Centre, which he played a pivotal role in establishing. He was promoted to Clinical Associate Professor in the Faculty of Medicine at the University of Saskatchewan in 1980 and was elected President of the Plain’s Health Centre in 1985.

Eduardo’s talents in plastic and reconstructive surgery were demonstrated in skilled excisional and reconstructive operations for cancers, hand surgery, and skin grafting in the treatment of severe burns; he published extensively on his research in these areas, particularly in tuberous sclerosis and burn treatment. He was elected to the College of Physicians and Surgeons of Saskatchewan in 1988 and in 1992 was unanimously elected its president. While president, Eduardo took passionate stances on the system of fee-for-service and third-party billing, which he felt depersonalized relations between doctors and patients, led to a public distrust in the medical profession, and produced a form of what he called “7-11 medicine.” He was known for his uncompromising honesty, his unwavering values that prioritized patient care over physician profit, and the tough love with which he demanded the utmost standards in the operating room. He was a direct, spirited, and forceful communicator, which could be intimidating for some, but his formidable presence was softened by his quick wit, sharp sense of humour, and a love for good jokes.

Eduardo devoted his time outside of work to his children and his wife Rosario. His parenting style was no nonsense and reflected his tough upbringing in Rio Aller. He believed in right and wrong and personal accountability. He imparted this to his kids by example and with many lectures. His big heart would display itself with a smile or an act of compassion. He wasn’t known for materialism – no flashy cars or clothes or ostentatious displays of success; his focus was on ensuring that his wife and children were raised with comfort, security, and with a sense of open possibility for the future. He enjoyed table tennis in the basement, squash at the Lakeshore Club, weekly soccer games with his son Eduardo Jr., friends, and colleagues, and intense games of “Parchis” (a popular board game in Spain) or dominos, which he never lost – even in the final months of his life.

Eduardo loved to socialize and tell stories with friends and colleagues. He had a sense of irony with his storytelling and can be remembered sitting in the living room or the back patio with a drink in hand, surrounded by friends. Ed enjoyed lively and challenging conversations about life, politics, medicine, and his homeland. He had no patience for small talk and liked to speak directly with strong opinions.

The family wishes to thank the nurses and physicians in the Palliative Care Unit, 4A, and MSU of Pasqua Hospital for their attentiveness, tenderness, and care.

Donations may be made to the Dr. Eduardo Alvarez Memorial Bursary to assist medical students in financial need at the University of Saskatchewan's College of Medicine. Donations can be received online at donate.usask.ca. Select College of Medicine and specify “Dr. Eduardo Alvarez Memorial Bursary” in the comments section. All donations are eligible for a tax receipt.