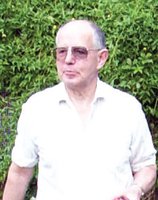 George Orr-McAuley passed away peacefully with family by his side, on Saturday, September 22, 2018, in Regina, SK at the age of 82 years. He was predeceased by his wife Betty (2001). Left to mourn are his children, Sheelagh, David, Patrick and Michael; as well as several grandchildren, nieces, nephews and friends. George, the youngest child of four, was born in Glenarm, Northern Ireland on September 6, 1936, to Margaret (nee Thompson) and George McAuley. His siblings were James, Elizabeth, and Joeen. George grew up a farm boy and spend much of his youth and early adulthood on the family farm at Druid’s Altar on Islandmagee, which would often fondly recall throughout the course of his life. As a young man, George went on to medical school where he obtained first-class honours at Queen’s University Belfast and later became a specialist in Otolaryngology. In university, George met his future wife, Betty Beattie, while she too was studying medicine. The two married February 27, 1965, at the Mountjoy Presbyterian Church in Omagh, Tyrone, Northern Ireland.  Later that same year, their first child and only daughter, Sheelagh was born. This was followed by David a year later. Before the end of the 1960s couple migrated to the Toronto area and had two more children, Patrick and Michael, before the mid-1970s. George was a physically active individual and enjoyed keeping busy throughout his life. Besides keeping up with the hard demands of the farm in his youth, he was athletic and an avid cyclist, who would frequently go on cycling adventures. In university, George was on the track team and ran long distance regularly. He continued to maintain an active lifestyle and was a regular runner for approximately half a century, often taking the time to participate in various 10km fundraising runs over the years. George was often labelled as a stubborn Irishman many times over for his unrelenting spirit and tenacious attitude as an individual. He simply had a tough time saying “no” to anything. As a testament after moving to Canada, he taught himself first, and then his children, to ski, skate, and play organized hockey with no prior experience with any winter sports. George worked as a specialist physician, otolaryngology, for the duration of this career. The majority of his career in the greater Toronto area, but spent the last part of his career practising in Moose Jaw, SK.  George had a lifetime passion to help people and it reflected through his work. Outside of work, George often enjoyed getting to meet new people and often had many great stories with fantastic insights to share. In his later years, he was often reflecting upon his fond memories of growing up in Northern Ireland and loved to share his experiences. We know you would be with us today if heaven weren’t so far away.  Celebration of Life will be held at Speers Family Centre, 2333 Cornwall Street, Regina, SK on Thursday, August 4, 2018 at 1:00 p.m.