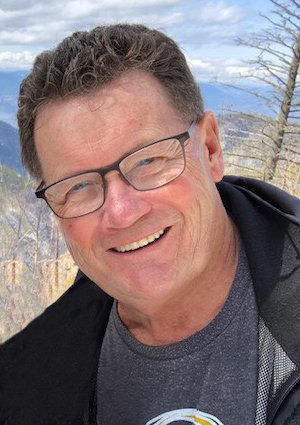 The video of memories is available below the obituary

Warren Woods made a living on the air without having any airs about him. He was the humblest, nicest man — someone who made everyone feel like his best friend. To most people, he was “Woodsy.” To Nicole and Chris, he was “Dad.” He was “Grandpa” to Sloan and Jack. The common denominator, regardless of the relationship, is that Woodsy was much-loved by all and will be dearly missed. Woodsy passed away on the afternoon of Wednesday, January 20, 2021 at Regina General Hospital, with Nicole and Chris at his side. He had been diagnosed in late November with COVID-19 and hospitalized for seven weeks, during which there was an outpouring of love and support that spanned the country, the sporting community and the media universe. Many of the tributes emanated from Sudbury, Ont., where he was born on August 28, 1954 — the eldest of Rev. Dr. Cecil and Sally Woods’ six children. Woodsy subsequently became a beloved big brother to Karen, Helen, Paul, Phil and Sara Jane. He was predeceased by his parents (Cecil on August 16, 1983; Sally on April 12, 2015); and sister Helen (Nov. 15, 2008). Woodsy’s path became clear before he even reached high school. At age 12, during the Toronto Maple Leafs’ championship season of 1966-67, Woodsy attended his first game at Maple Leaf Gardens and turned it into his introduction to play-by-play. It was such an auspicious start that his commentary was rewarded with first prize in a regional public speaking contest. In high school, he was already a board operator at CKSO, a new FM station in Sudbury. He proceeded to Mohawk College in Hamilton, where he enrolled in Communication Arts and majored in radio. He was such a natural that, before his second year of studies, he received an offer to go on the air at CKSO and decided to begin his career on a full-time basis, at age 20. After spending four more years in those familiar, friendly surroundings, Woodsy attained his childhood goal of becoming a sportscaster by joining CFCL, a television station in Timmins, Ont. While in Timmins, Woodsy met his future spouse, Anne-Marie, and a 29-year partnership ensued. Two years in Timmins were a prelude to a job with Thunder Bay Television, with which he enjoyed a six-year stay. In Thunder Bay, he met his best friend (John Cameron) and got to know curling legends such as Al Hackner and Rick Lang. Next stop: Regina, where a third local station (then STV; now Global) joined the television market on September 6, 1987. That afternoon, Woodsy covered his first Saskatchewan Roughriders game — one in which Dave Ridgway kicked a 60-yard field goal, then a CFL distance record — and soon reported on the proceedings on STV’s inaugural newscast. So began more than a quarter-century at a station with which he became synonymous. He was so recognizable and relatable that, years later, fans would still approach him and say, “I watched you on Sportsline.” And he was easy to approach, because he wasn’t really one for press boxes. Woodsy preferred to watch Regina Pats games from the concourse, while chatting with people and enjoying a beer. His sociable nature extended to the curling rink, where he was at home as a participant, a broadcaster or an enthusiast. The long-time voice of the provincial Tankard, he was inducted into CURLSASK’s “Legends of Curling” honour roll in 2014. By that time, he had finished his first of seven years with Rawlco Radio, with which he excelled numerous capacities at CJME while serving as a mentor and friend. It was not unusual for Woodsy to do the morning show, sneak in a nap, and then return to the studio for a stint on The Green Zone. He was quick to smile and slow to anger, unless he encountered a train on the Ring Road. Over the years, hundreds of youngsters were honoured as one of “Woodsy’s Little Heroes.” On the station’s Roughriders post-game show, he was Wandering Woodsy, bouncing from table to table at his second home — the Lancaster — and asking fans for their thoughts on the game or the state of the team. His versatility was such that he could also play host to a gardening show or pose questions of Paul McCartney. He was omnipresent and seemingly inexhaustible, greeting everyone amicably even on the longest days (see: Grey Cups, Memorial Cups, Briers, Scotties Tournament of Hearts, Tankards). The people Woodsy touched, wherever he went, rallied around him in resounding fashion in early January of 2021 when a GoFundMe page was established to provide assistance during what was expected to be a long, but progressive, period of recuperation. The goal of $50,000 was exceeded within a day — another testament to the high esteem in which he was held. The family is so grateful for all the support it has received, dating back nearly two months, and also wishes to extend its sincere thanks to the doctors, nurses and specialists in the Medical Intensive Care Unit and Unit 3E at Regina General Hospital. Nicole, Chris, Cara (Chris’s wife), Sloan and Jack look forward to visiting with and thanking everyone personally when the easing of COVID-19 public gathering restrictions allow for a celebration of their father’s rich life.

A Celebration of Life will be held at the Caledonian Curling Club,  2225 Sandra Schmirler Way, Regina on Saturday, August 28, 2021 at 5:00 p.m. To view the livestream of the service, please click on the link above, which will be available on the day of the service.

Share Your Memory of
Warren
Upload Your Memory View All Memories
Be the first to upload a memory!
Share A Memory