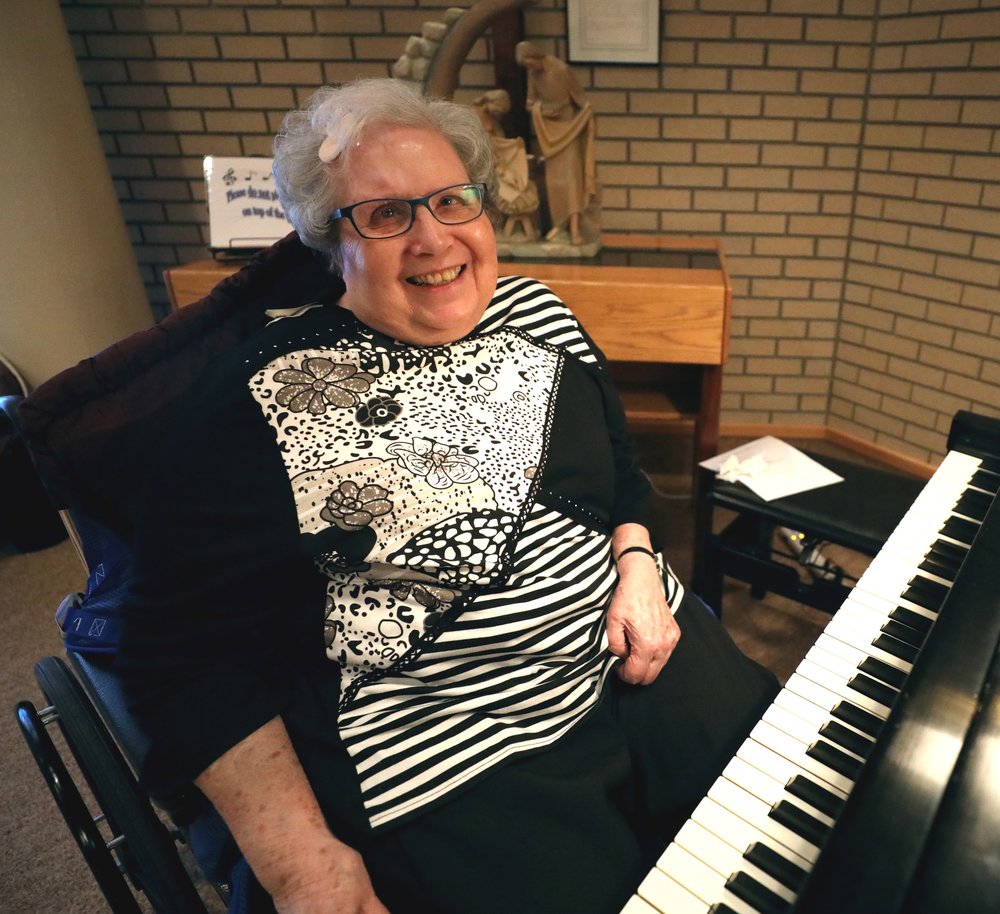 Sister Joan Miller passed away peacefully at the Pasqua hospital on February 1, 2021 at the age of 87. She was born in Radville Sask. to Joseph and Magdalena (Vogt) Miller.

Sister Joan grew up in a family of five children and was predeceased by her parents and her three brothers, Hugh, Patrick and Monsignor Ken.  Sister Joan is survived by her sister Irene Ryan and sister-in-law Loretta Miller. She will be missed by them as well as her nieces and nephews, her many friends and the Sisters of Our Lady of the Missions.

The Miller family moved to Regina when Joan was young. At the age of 6, Joan began music lessons and with the strong encouragement of her father she practiced daily.  After graduating from Sacred Heart Academy in Regina she entered the Sisters of our Lady of the Missions as a postulant on August 15, 1951 with eleven other young women. Joan pronounced her vows on July 26, 1954.

Sister Joan began her teaching career in Saskatoon by teaching Kindergarten and taking piano lessons from Lyell Gustin. She then moved on to teach at Sacred Heart Academy in Regina. Joan continued to teach during the year and study in the summer. She received many diplomas, awards and the Doctor of Music Degree from Indiana University. And at the same time she taught music and was involved with the music department at Brandon University. She is known in Canada as a piano teacher, adjudicator, clinician and senior examiner for the Royal Conservatory of music.

Dr. Joan Miller, in spite of her many accomplishments, was a very humble and grateful soul. She appreciated every little thing that was done for her. Sister Joan had a deep care for each of her piano students, always encouraging them. She was known as a very good and strict teacher. Her listening ear and caring heart endeared her to many, and several past students have continued to keep in touch with her over many years.

Sister Joan's health began to falter some years ago so that she needed to move to Santa Maria Nursing Home. Her joy in the last two years has been to play, once again, her Steinway grand piano after it got moved to Santa Maria chapel. Her father had given the piano to her as his last gift in 1970.

The Sisters of Our Lady of the Missions are most grateful for the loving care Joan received from the staff at Santa Maria and the staff at Pasqua Hospital.

Funeral Mass will be held at Christ the King Church, on Thursday, February 11, 2021 at 11:00 a.m. Due to COVID restrictions, seating will be limited. Please email: annaulie@hotmail.com if you wish to attend. To view the live-stream of the service please click on the link above on the day of the service.  In lieu of flowers, friends so wishing, may donate to the Mission fund of the Sisters of our Lady of the Missions, 393 Gaboury place, Winnipeg, MB R2H0L5