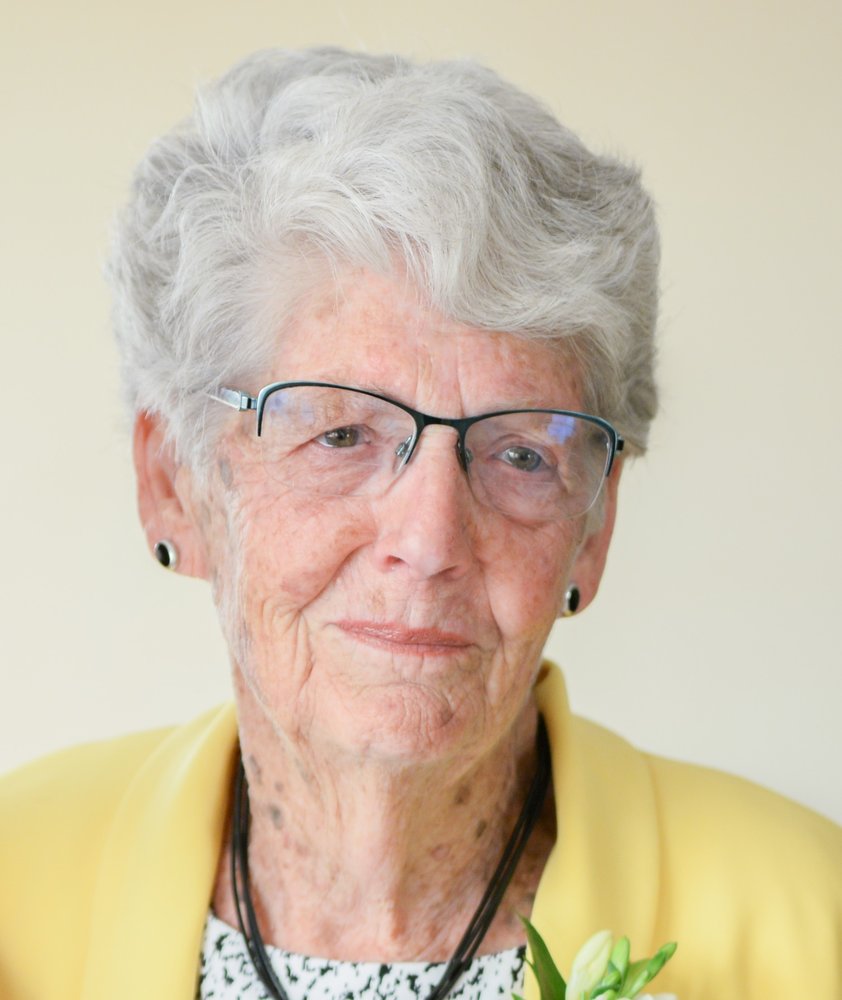 Beatrice Struthers died peacefully with her daughters by her side, in the Bengough Health Centre on Wednesday, April 28, 2021 at the age of 89 years.

Bea was born on the family farm at Dilke, Saskatchewan to James and Mary Laing on March 11, 1932.  She was the youngest child in her family and her childhood was a happy one, with 8 older siblings to dote on her.  Bea attended school at Dilke, then Normal School in Moose Jaw, which led to a three-year stint of teaching in a one room schoolhouse at Boharm, Sask.

Bea started dating Harold Struthers at the July 1st Bethune Sports Day in 1950 and he turned out to be the love of her life.  They married in Regina on Sept 5, 1953 and left immediately for Guelph, Ontario as Harry was completing his final year of veterinary medicine at the Ontario Veterinary College.  They returned to Saskatchewan in May of 1954 and settled in Ogema, SK.  It was there they established their home and veterinary practice and raised their family of four children.

Mum led a very busy life and was an integral partner in Dad’s veterinary practice.  There were always farmers at the door and on the phone at all hours of the day and night, and she juggled all of that along with managing a household and raising us four kids.  She was an incredible mother, supportive of our educations and our activities.  Mum was a fantastic cook and baker and often whipped up a meal for 20 people with 30 minutes of notice.

Despite our busy household, she found time to contribute to the Ogema community in many meaningful ways as a volunteer. Mum’s faith was important to her and she led C.G.I.T for many years and served on the local church board until she was in her early 80’s.  She was an original member of the Ogema Housing Authority, served on the Regional Park board and was president of the Ogema Dew Drop In Seniors’ Center for a number of years, just to name a few of her favourites.

Mum loved sports, both as a participant and as a fan.  She played ball in her younger years and bowled in her later years, but her true love was curling, especially the bonspiel season. Mum was an enthusiastic spectator of all sports involving her children and grandchildren. She followed the Blue Jays and was a Roughrider season ticket holder for over 40 years.   One of their favourite trips was to BC on the train to watch George and Ron and the rest of the Riders win the 1966 Grey Cup.

Bea loved to read and she read the Leader Post every day, even when her short-term memory deteriorated and she required a move into long term care in Bengough.  She also spent hours writing letters from the heart to comfort others and if you were lucky enough to receive one, you would have treasured it.  Her many talents included oil painting, sewing, knitting, gardening and working in her very large yard. Bea’s drink of choice was lemon gin and 7Up and she and Harry played crib every night while she was preparing supper. The two of them were not interested in winter travel to warm locations but they made a treasured trip to Scotland to celebrate their 40th wedding anniversary.  They preferred camping and the outdoors and their little tent trailer travelled from coast to coast across Canada.

Mum loved to laugh and have fun.  She had a quick wit, a feisty nature, an occasional sharp tongue, and a heart of pure gold. We feel truly blessed and we will miss her.

She will be lovingly remembered by her children; son Howard (Marielle) Struthers of Ormstown, Quebec; daughters Susan (Glen) Viergutz and Cathy (David) Webb, all of Ogema; and her son David (Sally) Struthers of Cranbrook, BC.

She is also survived by her sister, Lillian McArton; and Harry’s brother-in-law, Peter Rorbeck; as well as many loving nieces and nephews and a multitude of friends.

Bea’s family wishes to extend our heartfelt thanks to the caring staff of the Bengough Health Centre for the exceptional care they have provided to our mother for the past two and a half years.  There will be no service at this time but Bea will be cremated and interred in the same plot as Harry in the Ogema Cemetery at a later date when inter-provincial travel and large family gatherings are once again possible.

Donations in Bea’s memory may be made to Twilight Home Auxiliary c/o Carlene Gauley, Box 186 Bengough, Sask S0C 0K0 or Town of Ogema Pool Donation, Box 369 Ogema, SK S0C 1Y0 or a charity of your choice.