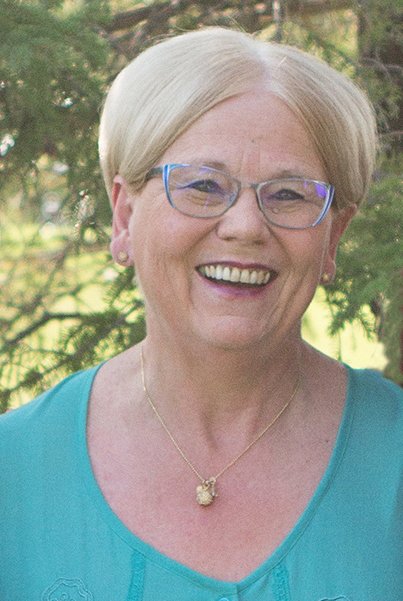 Please share a memory of Rev. Marjorie to include in a keepsake book for family and friends.
View Tribute Book

I’m not sure how anyone could ever have found joy in a plain, blue denim shirt.

The shirt’s seams are worn. The pale blue fabric has somehow become even paler over the decades.

It shouldn’t be special. But it is.

Marj made it that way.

Marj always longed for summer vacations so she and her husband of nearly 50 years, Dave, could escape to the lake. Nowhere made her happier.

The blue denim shirt was her camping uniform.

Every single day at the lake, Marj woke up, put on this unassuming yet extraordinary shirt and created a welcoming place of joy and love.

She wore it while she raked campsite dirt to make her family feel more at home.

She wore it while chopping wood. Marj loved to do that. An absurdly large woodpile made her smile - probably because the campfire is the ultimate place to bring people together to find joy and love in each other.

Through it all, she wore that shirt - something so mundane that her love MADE magical.

Creating places of joy and helping others find it was part of Marj’s life from the beginning.

She was born in 1951 to Grant and Doreen Hoggarth. Grant was a grain buyer and moved to towns across the prairies to run elevators. They eventually settled in Grenfell. One day, while she was a young girl, Marj went with her dad to work and decided to help him make his office a little more welcoming.

She grabbed a duster and futilely cleaned the scale at the grain elevator.

It was in Grenfell where Marj got her first taste of the church. She sang in the United Church choir and was a part of CGIT.

More importantly, she met Dave there. The two fell in love and went to university.

Marj studied physiotherapy at the University of Manitoba and then joined Dave in Saskatoon where she practiced and he studied.

Marj and Dave later moved to St. Albert where she finished her physiotherapy degree but decided to stop practicing when her first child, Fletcher was born. Leanne was born less than two years later and the family moved back to Saskatchewan soon after.

Amy was born in Regina 6 years after Leanne.

Marj later felt a call to enter ministry. She attended St. Andrew’s College and received her Master of Divinity.

In 1999 she was ordained and over the next 22 years, Reverend Marjorie Kent served at United Church congregations in Strasbourg, Bulyea, Silton, Regina (Rosemont United) and Lumsden (St. Andrew’s United Church).  She also served the wider church through Conference and on the St. Andrew’s College board. She relished in her profession and took special pride including music in her work.  She excelled in services of remembrance to honour lives lived.

Throughout her career, she cherished helping her congregations see the joy in our world and in God.

She even helped her children on the happiest days of their lives. Marj conducted the wedding ceremonies for Amy when she married Ken Spasoff and for Fletcher when he married Shauna Young-Kent.

Marj cherished her six grandchildren. She was even at the birth of two of them. Matthew, Victoria, Ari, Bekah, Linden and Luke adored Grandma, too.

As she did with so many others, Marj helped her grandkids see the beauty and goodness in life. When Linden thinks of his Grandma, he thinks about going for walks at night at the lake and looking at the moon together.

Ari embraces memories of cuddling with Marj while sitting around the campfire, singing ‘Fire’s Burning.’

Victoria remembers visits when Grandma Marj would come upstairs, sit on the floor and play mini-sticks.

Marj created joy wherever she went.

Her surviving family will remember that joy and love. In addition to her beloved husband, children and grandchildren, Marj is survived by her mother, Doreen Hoggarth, her brother Earl Hoggarth (Jan), her sister-in-law Mel Johnson and nephews, Cameron and Nolan Hoggarth (Laura).

Marj also shared her love and joy with her church families and even with people she hadn’t even met.

One day in a campsite, she was once again wearing that worn out, denim shirt. She was chopping wood and adding it to an already ridiculously sized woodpile. Leanne asked her, “Why do you really need to chop so much wood and make such a large wood pile? There’s no way we’ll ever be able to burn it all before we go home.”

Marj stopped for a moment, looked at her and said, “Any place you go, you leave it better than you found it.”

She then returned to chopping.

Marj knew another family would soon occupy her site. She wanted to make it easier for them to feel what she did.

At the time, it was another sign of her love for us and for others – but her words now seem more prophetic.

Marj left the world better than she found it and she did it with joy, with love, and an old, blue shirt.

A Service of Remembrance will be held at Heritage United Church, 1050 North Arnason St, Regina, SK on Saturday, June 25, 2022 at 2:00 pm with Rev. Joy Cowan officiating.   The service can also be viewed at  www.facebook.com/HUCRegina.  The family requests that all those in attendance wear a mask during the service.

Arrangements are entrusted to Speers Funeral Services. Their staff and Marj’s longtime friend Lorne Palmer have earned her deep respect for the work they do. In our loss, we understand why.

In lieu of flowers, a donation in Marj’s memory may be made to the United Church Mission and Service Fund or to the Heart and Stroke Foundation.