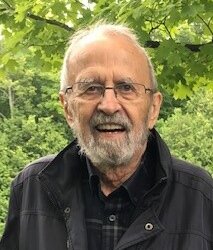 Ronald Michael Zegil was born on August 13, 1941, in Selkirk, Man. and grew up in Port Arthur, Ont., which later became part of Thunder Bay. He loved spending time at his grandparents’ farm in Selkirk and while he never entertained thoughts of becoming a farmer, his first job out of high school was working in the accounting and payroll office at Saskatchewan Wheat Pool in Thunder Bay, where he knew the freight rates for every town across the prairies.

Ron’s next career move took him to Canada’s north in 1962. Always the hospitable sort, Ron entered the hotel business, first as a bookkeeper and assistant manager and then as manager of the 50-room Hudson Hotel in Churchill, an experience he called his university education because he learned how to deal successfully with people. He had a voice made for broadcast and put his people skills to good use when he joined CBC in 1966 as an announcer/operator in Churchill. Ron hosted major current affairs programs and remote broadcasts, provided on-air stories for local and national news, produced network documentaries and trained new staff.

Ron and his wife Olive raised Kim (born in Churchill) and Michael (born in Yellowknife) as Ron worked as an announcer/operator in Churchill, Yellowknife and Whitehorse and later moved into line management, where he performed all duties associated with managing a small radio station in Churchill and Yellowknife. Ron represented CBC to the public in the region and established community radio stations in remote settlements served by the region. Ron and his family moved to Ottawa in 1978, where he worked in human resources supporting the Northern Service. Among his responsibilities, he travelled extensively to recruit the best and brightest to CBC, guided line managers in the interpretation of collective agreements and delivered training programs. After Ron and Olive parted ways, Ron moved to Calgary in 1986 in a human resources position at CBC Alberta.

On New Year’s Eve 1988, Ron had a chance encounter with a journalism student who was partying at the same bar - J.R. Houston’s on Macleod Trail. Jean was meeting a casual date after midnight, but she and Ron had a long conversation and a few dances, ringing in 1989 together, and she thought this CBC-er was “a nice old guy.” She called him the following week when she started her practicum at the Calgary Sun and had her first article published, and their enduring romance began several months later.

Ron and Jean married in 1993 and moved with her young son Graham to Regina, where Ron had accepted a transfer to a human resources position at CBC Saskatchewan in what turned out to be his final move with the Corp. Ron was a dedicated stepdad and enjoyed many hours working bingos (including singing his bingo jingle to entertain the patrons) as he supported Graham’s years of participation in the Regina Lions Band. Ron retired from CBC in April 1997, and spent a few years in various part-time jobs. He cruised the aisles as a secret shopper until he was outed by an eagle-eyed shopper in Swift Current. He loved his work driving limousine, whether he was shepherding a car full of partiers to a concert in Saskatoon or delivering kids in grand style to their high school graduations. In 2001, Ron landed a position at the Brandt Centre box office, where he spent the next 20 years selling tickets and doing cash for various events, always primed and ready to greet a customer or share a laugh with his gang of coworkers, including the infamous Grumpy Old Men, of which he was a charter member.

Ron loved people, the north, news of all kinds, a good rum, driving, telling stories, going to concerts and travelling with Jean, and above all, spending time with family and friends. He adored being a dad, stepdad and grandpa, and he and Jean had a wonderful trip to Manitoulin Island in August to celebrate his birthday with Kim, Michael and their families. Ron and Jean had planned to visit Graham and Raelyn in California before winter’s end, but sadly, that was not to be.

Memorial donations may be made to the charity of your choice or the Regina Humane Society in appreciation of Ron’s lifelong affection for dogs. The family will hold a celebration of Ron’s life in spring 2022 for all who wish to attend. If you would like to be kept informed of plans for the Regina event or a get-together in Ontario, send your contact information to Jean at jean.mcluhan@me.com. Thank you to everyone who has reached out to offer sympathies and share memories of Ron, and many thanks to Roberta Ripplinger and the caring staff at Speers for their outstanding service.

Share Your Memory of
Ron
Upload Your Memory View All Memories
Be the first to upload a memory!
Share A Memory