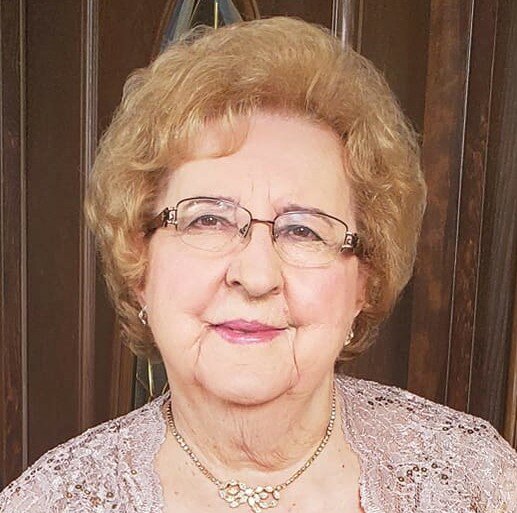 On December 3, 2021, the world and our family lost an extraordinary educator, wife, mother, and leader.

Jayne passed away peacefully at Regina General Hospital with family at her side. Wife to Ernest Paluck; Mother to Deidre (Troy), Elan, Lisa (Malcolm), and Holly; Grandmom to Cameron, Elora (Jackson), Dylan; Errol (Kate), Kiera; Calum and Kelsey; Great Grandmom to Juniper; and many cousins, nieces, and nephews.

Jayne was the eldest daughter of Michael and Mary Dedio (both predeceased). She grew up in the Maybridge District near Pelly, Saskatchewan, where she and her sister, Gladys (predeceased), participated in community and church events. Being a first generation Ukrainian-Canadian family, mom learned the value of working hard and building the community one envisions with others. It was through this community she met and fell in love with Ernest Paluck who became her best friend, husband, and dance partner of 62 years. They married in 1959 and moved to Regina in 1962, where Mom accepted a teaching position with the Regina Roman Catholic Separate School Division and remained happily employed until her retirement in 1989. As with her family, Mom loved her students and felt it important to encourage them to fulfil their God-given potential. She valued the arts and enjoyed introducing students to plays and musicals, many of whom fell in love with this field and gained valuable skills.  It was common to be out with Mom and have former students, parents of students, colleagues, or supervisors say hello and share a memory of her that touched their life. Some regularly called on holidays for many years to wish her well and kept in touch until her passing.

Mom remained a ‘teacher’ throughout her lifetime and often saw opportunity to learn something from an event, article, or experience she had, and share that learning with others. She truly was a lifelong learner who was passionate about Ukrainian culture, language, and history. Mom taught Ukrainian language classes at the Department of Slavic and Germanic Studies (University of Regina), mentored and supervised aspiring teachers in the Faculty of Education (University of Regina), and became increasingly involved in the Ukrainian Catholic Church and community at large at the local, provincial, national, and international levels, having actively served over 17 different organizations.

By example, her parents taught her that if she wanted her community or organization to be the best it could be, it was up to each of us to do so. In this way, Mom left an extraordinary imprint in the organizations and people she served and was greatly admired, respected, and recognized with several awards over her lifetime for her contributions in the areas of culture, education, humanitarian, and social project initiatives, among some of the most humbling being: the recipient of the UCC Saskatchewan Nation Builder Award (2002), the Queen’s Diamond Jubilee Medal (2013), Honorary Life Member in the Ukrainian Catholic Women’s League of Canada (2001), and Honorary Life Member with the Canadian Baton Twirling Federation (2019). Under her leadership in the Ukrainian Catholic Women’s League of Canada, the first international humanitarian aid effort from Canada for the Children of Chornobyl project was successfully fulfilled as a provincial initiative; the development of the national publication, Nasha Doroha; and contributed to the organization’s constitution and policy development. She sought to advance the role of women within the church and the greater community, moving them ‘from the kitchen to the community’ as leaders of faith and culture. Due to her success in Canada, Mom was invited in 2012 by Patriarch Sviatoslav Shevchuk, Major Archbishop of the Ukrainian Greek Catholic Church, to lead an initiative that would implement and nurture the formation of the Ukrainian Catholic Womens League in Ukraine involving women from the Ukrainian Catholic Womens League of Canada in the Eparchy of Saskatoon.

Many thanks to Dr. Iffit Muhammad, the Royal Oaks Care Home staff, and the doctors and nurses at the Regina General Hospital who provided great care and comfort to Mom in her final days.

Prayer service (Parastas) will be held at St. Athanasius Ukrainian Catholic Church, 55 McMurchy Avenue, Regina, SK, on Friday, December 10, 2021, at 7:00 p.m. A funeral service will be held at the same location on Saturday, Dec 11, 2021, at 11:00 a.m. with Father Vasyl Tymishak, celebrant, and concelebrants Father Ivan Nahachewsky and Father Warren Dungen. At the request of family, double vaccinations and masks are required for those attending in person. Due to public health recommendations and limited space within the church, the services will be livestreamed on the parish Facebook page as well as its website to accommodate remote participation. Flowers are gratefully declined. Those so wishing may make a donation in memory of Mom to the Musee Ukraina Museum’ s Retire the Mortgage Campaign 2021 (Box 26072, Saskatoon, SK, S7K 8C1), or to the St. Athanasius Memorial Fund (55 McMurchy Avenue, Regina, SK, S4R 3G3).