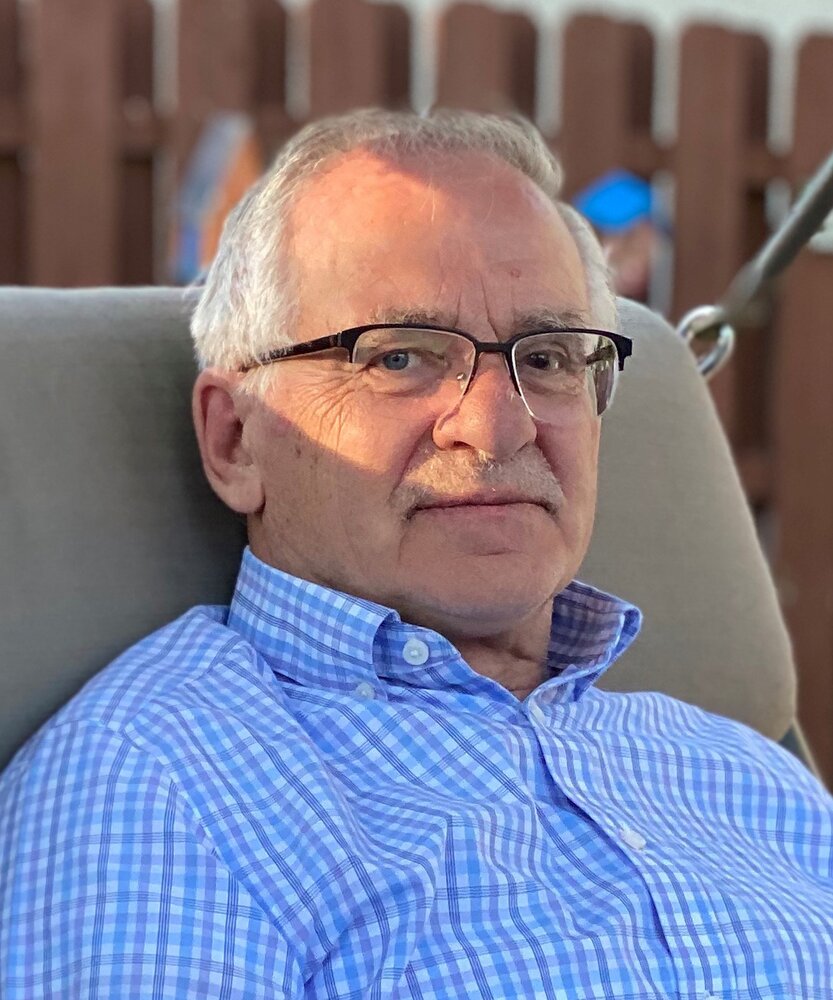 11:00 am
St. Cecilia's R.C. Church
5020 - 7th Avenue
Regina, Saskatchewan, Canada
Attendance via livestream is highly encouraged. To view the livestream of the service, please click on the link above George's Obituary on the date and time of the Service.

George Anthony Schaan of Regina, SK passed away peacefully at the age of 75 after a hard fought battle with Alzheimer’s disease.  He is survived by his wife of 51 years, Patricia; their 5 children: Darren (Bernadette) Schaan, Becky (Dan) Turgeon, Rob (Kim) Schaan, Lee-Anne (Phil) Pearson, and Miranda (Jon) Pearson; and grandchildren: Keely (Kyle) Nelson, Zachary and Boston Schaan; Mason and Marek Turgeon; Felicity, Jonah, and Sam Schaan; Audrey and Violet Pearson.  George will be missed by the extended Schaan, Volk, Ell, and Ziegler families and by all who knew him.  He was predeceased by his parents, Tony and Magdalena (Volk) Schaan;  his brother, Francis Schaan; and parents-in-law, Fred and Julia (Ziegler) Ell.

George was born in Saskatoon on June 12, 1946 and grew up on a farm near Young.  He earned his Bachelor of Arts and Bachelor of Education degrees at the University of Saskatchewan and began his career teaching high school in Imperial where he met his wife.  Due to his love of small town life, he spent his entire career teaching in rural schools.  As newlyweds, George and Patti spent 3 years teaching in Wabowden, MB.  Following a move back to Saskatchewan in 1973, George taught in Canwood, Crane Valley, and Viceroy.  He accepted the position of teacher/principal at the Wilcox Public School in 1981 and remained there until his retirement in 1998.  He and Patti moved to Regina in July of 2000.

A player and coach in every community he called home, George loved sports, with his real passion being baseball. Family vacations were often planned around ball tournaments.  Winters were typically spent coaching youth hockey or ringette, flooding the local rink, or packing his team or class into the family station wagon or Suburban to get them to gym class, practice, or an away game.  In summer, his passion for baseball shone as he established leagues in his multiple home communities, including Wilcox where he developed a new inter-community youth baseball league.  Being community-minded, he was a dedicated member of several local service clubs.  A teacher who played with his students as much as he taught them, he could be seen pushing kids on the swings, retrieving balls off the school roof, kicking the soccer ball with his students in the schoolyard, using a snowblower to create mountains for recess play, and throwing batting practice.

As a man of faith and religious devotion, George was always active in his parish, serving as lector, eucharistic minister, and lay presider. In his retirement years, he volunteered at Pioneer Village offering pastoral services to the residents of Mutchmor Lodge, Hewitt Place, and Regina Village.  George loved to sing the hymns and his voice could always be heard singing from the congregation with outright joy.

Being an avid reader, George could often be seen walking to and from the public library with a stack of western novels in hand.  He continued to find ways to teach during retirement and earned his 15-year certificate for volunteering with the Regina Public Library English as a Second Language program where he worked with people who were new to Canada.

Despite his many roles serving the community, George remained a dedicated husband and family man throughout his life.  He took great pride in watching his children succeed in their various academic, athletic, spiritual, and professional endeavours.  He told stories about the olden days with a twinkle in his eye and loved a game of checkers with the grandchildren or dealing the cards around the table.  Dad was always there to help with flat tires, yard work or renovation projects around the house.

Whether it was white shoes on the dance floor, a sledgehammer for a demolition project, a shovel after a snowfall, hauling bales with his brother, Albert, stealing a base on the ball diamond, or racing his students for track and field, he only knew one speed – go!  With this energetic spirit in mind, we encourage you to:  Sing out loud.  Wear your white shoes.  Dance with joy.  Shovel your neighbour’s walk. Enjoy a rum and coke. Volunteer where you are needed or join a service club. Read at church. Be a coach. Play catch with a ball and glove. Swing for the fences. Steal third. Run hard and give it your all. Sneak a treat. Cheat a little at cards. Always look for a family rate. Build a snow fort. Push a kid on a swing. Skip over words while reading your kids the last story of the night. Halloween the whole town over. Kick around a soccer ball. Read a book from the library. Defeat your grandkids at checkers. Love your family.

Funeral Mass will be held at St. Cecilia R.C. Church, 5020 7th Avenue, Regina, SK on Saturday, January 15, 2022 at 11:00 a.m. with Rev. John Weckend presiding. Interment in Riverside Memorial Park. Attendance via livestream is highly encouraged. To view the livestream of the service, please click on the link above which will be made available on the date and time of the service.

Share Your Memory of
George
Upload Your Memory View All Memories
Be the first to upload a memory!