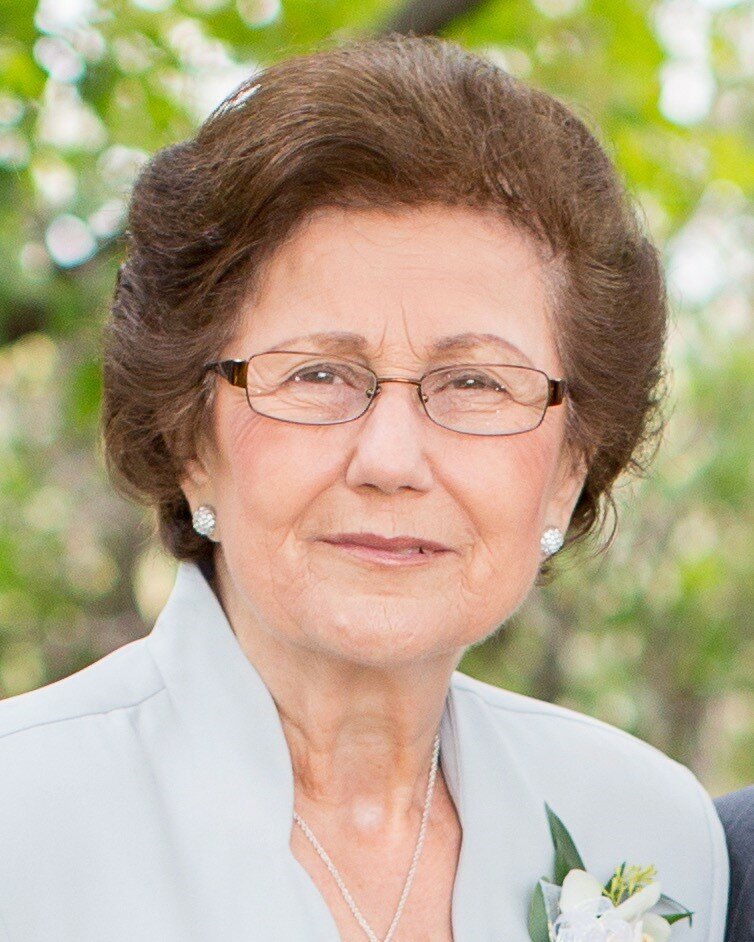 It is with great sadness that we announce the loss of Elpis (Hope) Syrgiannis who passed away peacefully on February 11, 2022 at the age of 86.

Elpis was predeceased by her parents Maria and Vangelis (Kontaxi), siblings Kostas, Miltiadis and Helen, and daughter-in-law Georgina. She is survived by her husband Tom, children Jim and Maria (Danny), grandsons Athan (Ashley), Matthew, and Luca, and great-granddaughters Georgiana and Elizabeth.

Born January 28, 1936 in the town of Langada, Greece, just outside Thessaloniki, Elpis was one of twelve children of which only four survived to adulthood. She often spoke lovingly of her mother who despite poverty and hardship kept the most immaculate home insuring her children were always well presented. Elpis was an active social young woman who thrived in her studies and set her sights on university. However, the times being what they were, her family could not afford to further her education.

Elpis was destined for something different. An acknowledged town beauty, she had already turned down a few proposals of marriage when a familiar face came back into her life. Tom (Athanasios) Syrgiannis had come back after a five year stay in Canada and asked her to join him as his wife. Curious about a new life in a new country, she agreed, and with her handsome new husband romancing her, they travelled across the ocean to begin their life together landing in Regina, Saskatchewan in October…just before the cold weather kicked in. Elpis often talked about that first Saskatchewan winter, laughter interspersing her memories of the cold, “like I had never experienced before!”

Despite some misgivings, she embraced her new life, working at the Marina Cafe by day and studying English at night. Soon she reached out to her dear sister Helen and invited her to come to Canada. The sisters were reunited, Helen met and married Tom Hatzitolios, and the two couples began their lifelong journey of raising their children and working together. Most notably at The Embassy Restaurant, which the Toms’ owned for thirty plus years.

Family, community, faith and charity were a vital aspect of Elpis’s life. A life-long member of Saint Paul’s Greek Orthodox Church, she was active in the Ladies Philoptochos Society volunteering numerous hours to help bake and cook. She helped support the Greek pavilion every year during Mosaic, from its inception onward. And was a proud past president and member for sixty years of The Daughters of Penelope, a charitable organization devoted to promoting Hellenism, education, philanthropy, civic responsibility, family, and individual excellence.

Elpis taught by example. She was meticulous and fastidious with everything. Taking great care to do things right. The fruits of her labours shone everywhere from her home to her garden, and in the care she took in her appearance. She was an outstanding baker, creating delicious Greek pastries that everyone craved. She was passionate about all things Greek and would often relate different stories about her life in Greece.

Elpis was devoted to her family. As the unofficial historian, she maintained a treasure trove of photographs over the years. A mountain’s worth for which we are thankful.  She was warm and engaging, firm in her beliefs, smart, and grounded. She loved her grandchildren and great grandchildren and was always ready to get down to their level to help with colouring or playtime.

Her strength and graceful resilience as she faced down cancer is an example for us all. Her strong presence will be deeply missed.

Many thanks go to the Allan Blair Cancer Centre and Dr. Dolata and Dr. Amjad for helping with her treatments.

And a special thank-you to Dr. Johnson and the palliative care team at 3A Pasqua Hospital for taking such good care of Elpis as she passed from our world to the next.