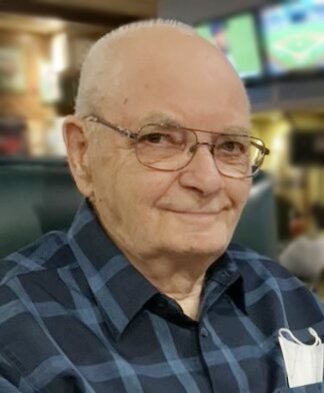 Walter, late of Regina, SK passed away suddenly on Wednesday, February 23, 2022 at the age of 86 years. He was predeceased by his daughter Melinda Herauf; parents John and Lena Klamot; sister Helen Oleksyn; in-laws Martin and Elizabeth Isinger; and several brothers and sisters-in-law.

Born at the family farm in the RM of Hoodoo, Walter grew up helping on the farm and attending school. Following school, he took a mechanics course. It was around this time that he met and married his wife, Mary. They soon took over the family farm and began raising their three children. In 1970, they moved from the farm to Prince Albert, SK where Walter worked at a few jobs while Mary taught school. Of note, he was the first ever Zamboni driver for a Prince Albert Raiders hockey game, which is now named Art Hauser Centre.  The majority of his working career was spent at Mont St. Joseph’s nursing home where he made many lifelong friends.

In 1992, Walter and Mary began their retirement with a move to Cudworth, SK and then to Regina in 2011 where they enjoyed more adventures until his passing.

Walter had a gift for fixing and repairing machinery, cars and such. Taking over the family farm was a natural fit. Walter and Mary were true partners in all they did, whether it was farming or raising a family. They always had many family and friends to share experiences with. Always together, they enjoyed fishing, camping, mushroom hunting, curling, golfing, and travelling the world, lawn bowling and much more. Visiting and playing Kaiser were favorite activities.

Walter was a proud family man supporting his children through all their activities, schooling, career and adult lives. He was especially fond of his grandchildren and great-grandchildren.

Walter will be dearly missed by his family and many friends. At Walter’s request, there will be no funeral service. A private celebration will be held on a later date.

Share Your Memory of
Walter
Upload Your Memory View All Memories
Be the first to upload a memory!
Share A Memory
Plant a Tree