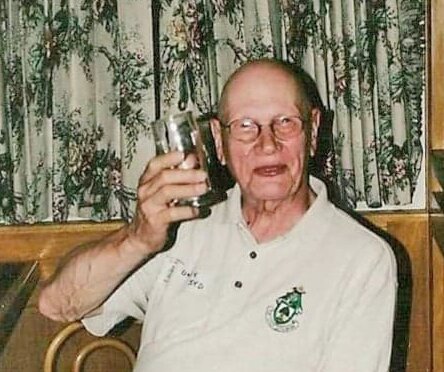 With heavy hearts we announce that Sydney Rushford Lowthian peacefully passed away surrounded by his loving family on Thursday, March 17, 2022, at the age of 97.

Syd was born in Regina, SK to Hannah and Sydney George Lowthian on June 16, 1924.  He was the youngest of three children and was predeceased by his parents, his sister Margaret (Philip) Groff and brother Jack (Gert) Lowthian.  He attended Davin Elementary School and graduated from Central Collegiate in 1942.  He played tennis and badminton competitively and recreationally and was a member of the Regina Tennis Club, where he met his future wife Mary Lee.  After graduation, Syd began his studies in accounting and achieved his Chartered Accounting degree in 1953.  He worked as an accountant in the public sector and eventually started his own home-based business in 1966.  Syd and Mary Lee were married in 1966, had four children, and lived in Regina until they moved to their cottage at Saskatchewan Beach in 1997, where they resided until moving back to Regina in 2019.

Syd was loved and cared for by his wife Mary Lee for over 55 years.  He was loved by his children Rob (Shelley) Lowthian, Kathy (Mike) Malecki, Dennis (Carla) Lowthian and Kendra (James) Pottage.  He cherished and greatly enjoyed his grandchildren, and they will have wonderful memories of quality time spent with him. (Adam (Jun) Lowthian and Victoria (Jay) Lanning, Dylon (Rachel), Sydney and Dallas Malecki, Audrey and Will Pottage, Alex and Mason Bunnie). Syd’s memory will be survived by them, along with numerous nieces and nephews, great-grandchildren, and extended family and friends.

Syd loved his family, his friends, and his pets.  And Syd loved being at “the beach.”  His happiest times were sitting in his rocking chair in front of a fire with a pet on his lap, with country music playing on the stereo, and having happy hour with his loving wife.  He also enjoyed sitting on the deck, looking out at the boats on the lake and having bonfires.  We will remember the way he told stories, his big laugh, and the wonderful time spent together.   We were very blessed with the many years we had with Syd and will hold our memories close to our hearts.

The family would like to thank Dr. McMillan for his great care over the years, and the staff at Parkside Extendicare in Regina for their attention and care for Syd this past year.  There will be a private family gathering to celebrate Syd’s life at a later date.

~Syd will be forever missed and always in our hearts~

Share Your Memory of
Sydney
Upload Your Memory View All Memories
Be the first to upload a memory!
Share A Memory