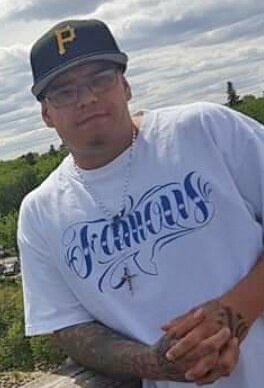 Raised with his sister Star, and brothers Craig and Justin, Jr. took on a nurturing role, focused on the wellbeing of his siblings and the ones who he cared deeply about. This carried on into later years with his three youngest siblings; J’dean, Jordynn and Jreydon.

In his spare time, he enjoyed moments with his beloved children; laughing, showing off his athletic ‘skillz’, and sharing his rediscovered passion for cultural traditions.

Working as a laborer in Saskatoon, he discovered a love for carpentry. Enrolled in the SIIT Trades Program, he was about to embark on a new journey to hone his talent in the fall of 2022.

Every time Jr. would enter the room, he would lift your spirits with his smile and infectious laugh that will carry on in our hearts and memories forever. Junior had a heart of gold and was really one of a kind.

Throughout his 30 years walking, running and striding through life he has come across many different people that he had a big impact on, too many bro’s, friends and family to mention, it’s nearly impossible to name them all. We all knew we had a special place with Junior so let his memory live on in the hearts of us all.

He was predeceased by his mother Karen; sister Star; and Paternal Grandparents Mary and Clarence Pratt and Maternal grandfather Jim Lejour.