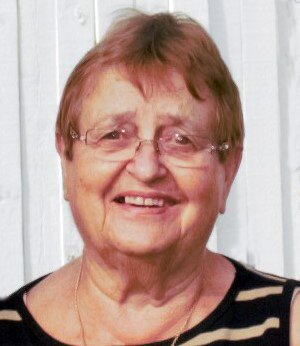 Pansy spent a few years teaching in one room schoolhouses in Tyvan and then Gibbs, Saskatchewan.  After working in several jobs (substitute teaching, The Bay and General Electric), Pansy held several different clerical positions with the Government of Canada before retiring.  Pansy and Norbert owned and managed numerous small businesses during their married life.  The most recent of these was their favourite, the Lik-A-D-Split Ice Cream shops, with two locations in Regina and, briefly, one location in Saskatoon.  After Norbert passed away in 1995, Pansy continued to operate the two Regina locations until she retired from the ice cream business five years later.

Pansy and Norbert also had a few well-known traditions that many would remember including their infamous New Year’s Day breakfast that originally started when the party ended, with Pansy cooking for sometimes up to 50 people in a morning.  Anyone that attended these “all day” breakfast gatherings can attest to how much fun was had by all.  There were numerous prizes handed out over the years including the award to the best bathtub swimmer, the Wacky Duck walker, and the best joke teller – which was always Ed G.

As a widower for almost 27 years, Pansy continued to be a very active lady who took her Par 3 golfing and floor curling quite seriously and kept a fairly busy schedule.  Pansy had an avid interest in gardening and always had a beautiful back yard and plentiful garden to show off.   Pansy loved to spend time with friends, family, and well-loved pets.  She had a witty and dry sense of humour, was content with her life and never whined or complained.

Pansy had several friends with whom she liked to travel, socialize and occasionally visit the Serbian Club.   Pansy loved spending time with her daughters and grandchildren.  She loved to travel and over the years some of her favourite trips included a cross-country trip through the U.S. and Canada with Norbert; Florida and San Diego with her daughter and grandchildren; Hawaii with her whole family (Pansy’s treat); and several trips to Mexico with friends and family.  Pansy could often be found at approximately 5:00 p.m. somewhere . . .  enjoying a Coors Lite or two!

For the most part, Pansy was very healthy, and in the later years of her life she insisted that she would not move from her home.  She was very proud of the fact that she lived “on her own in her home” albeit with a great deal of assistance from family and others.  Fortunately, she was always able to recognize and converse with those significant in her life. At the end she knew that she was very much loved and will be dearly missed.

As per Pansy’s wishes there will be no funeral service.  A private celebration of life will be held at a future date.

Flowers are gratefully declined, but friends so wishing may make a donation in Pansy’s memory to the Wa Wa Shrine Patient Transportation Fund (wawashriners.org) or the Regina Humane Society (reginahumanesociety.ca).

Share Your Memory of
Pansy
Upload Your Memory View All Memories
Be the first to upload a memory!
Share A Memory