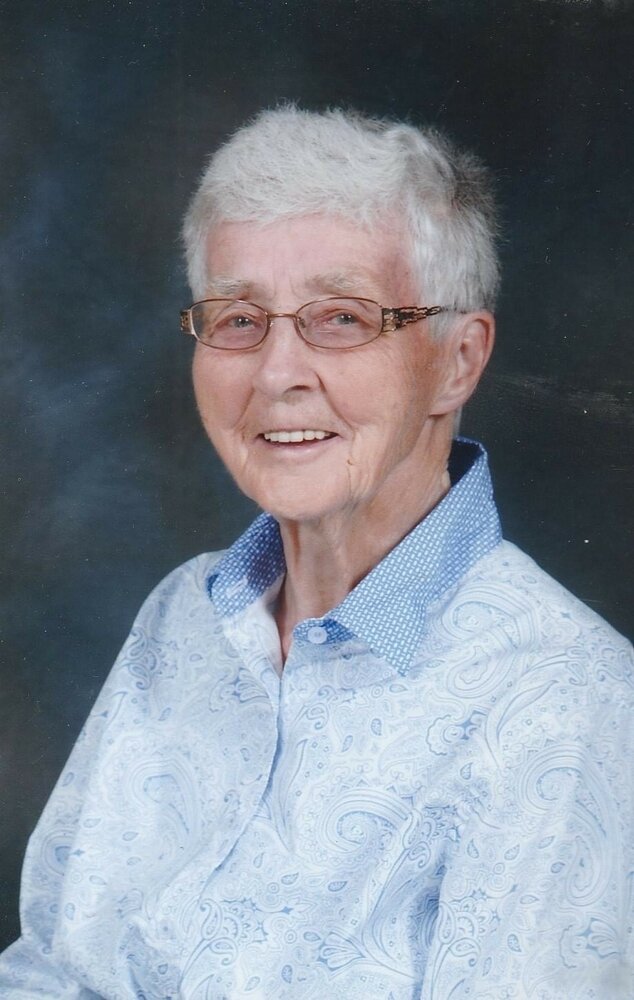 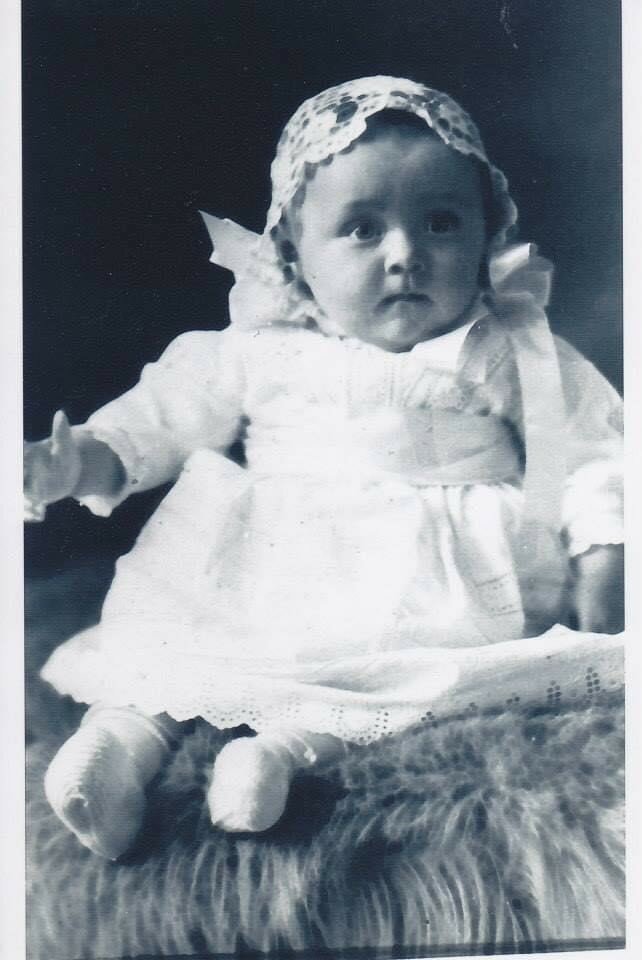 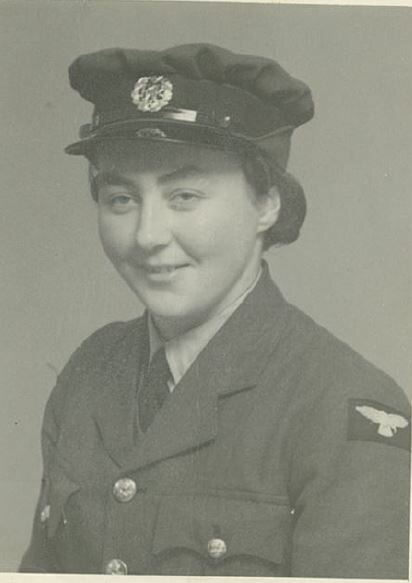 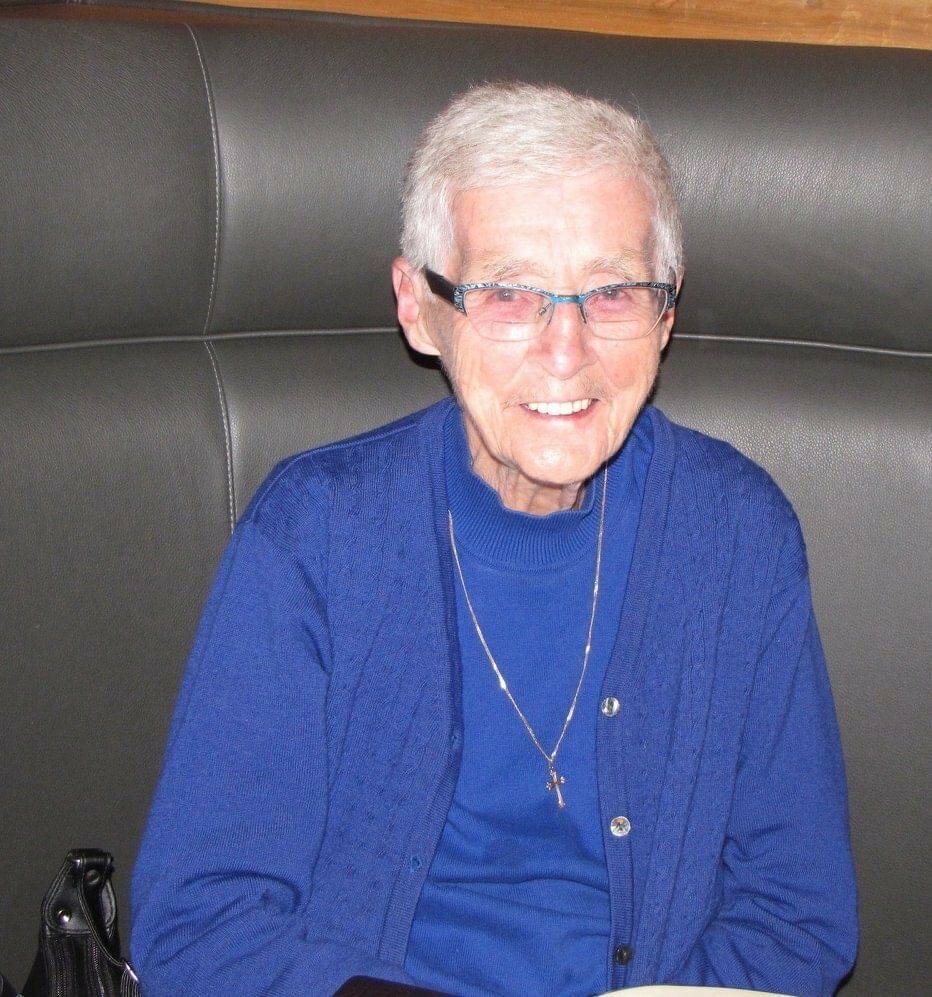 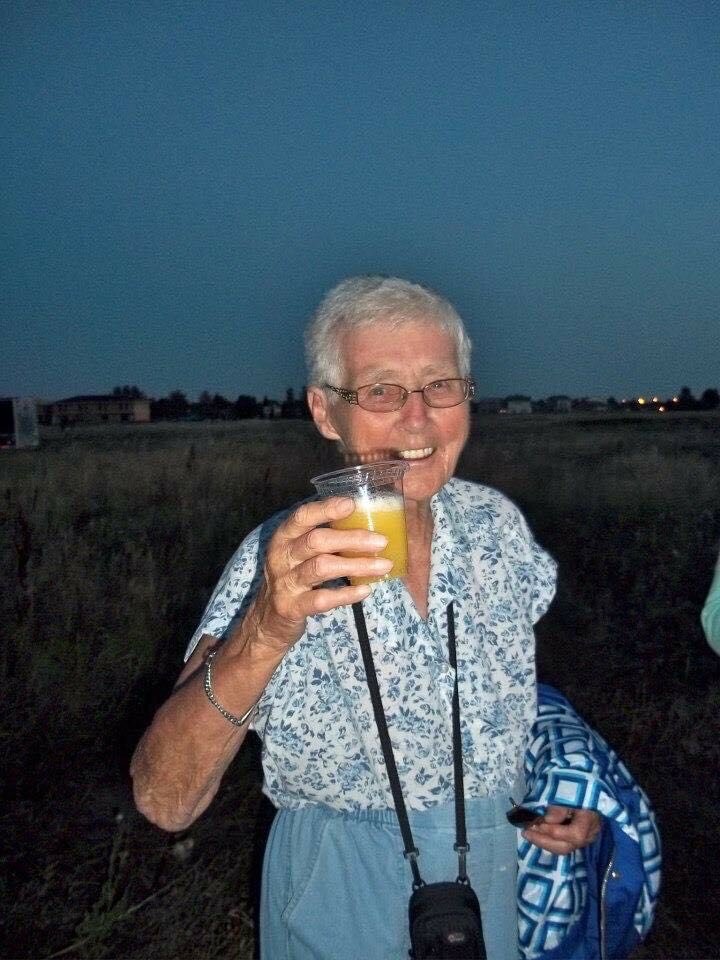 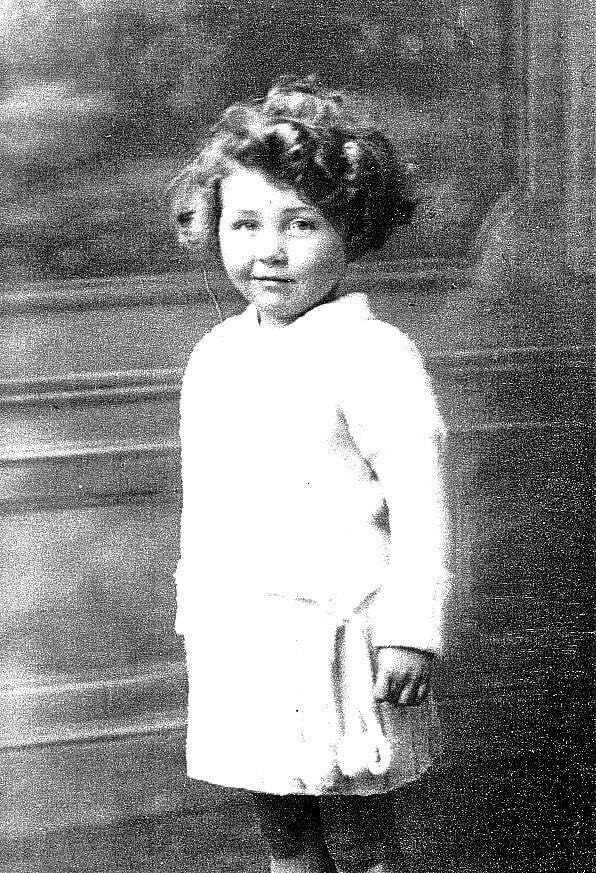 Jeanne was born on November 16, 1922 in Amiens, France. She died peacefully with family by her side the evening of April 16, 2022.  Jeanne was predeceased by her first husband, Marlowe O. Tweten in 1985 and her second husband Andrew T. Joerissen in 2008; three sons and a daughter in infancy; daughter in law Donna Tweten in 1972; her youngest son Roger in 2012 and her eldest son Alvin in 2017.

She had 4 sisters and a brother and was raised in England. Her mother, Phebe Yule was widowed at a young age so she was raised in a house full of women. This had a great influence in her life and her independence. She had a very good memory and was telling her life stories until the end of her life. She did well in school and worked as a governess to a few children and also as a dental receptionist before she was married.

After raising her 9 children she worked as a babysitter to families in the Lakeview area. She could often be seen walking them to Wascana Park and the Totem Pole. She absolutely loved babies and children. Every night she would read bedtime stories to her children and taught them to read before kindergarten. She introduced many classics to the families that she looked after. Every birthday the grandchildren and her extra grandchildren would receive a book. She loved reading. She was a great knitter and many people were the recipients of hand knitted sweaters.

Jeanne served in the Women’s Auxiliary Air Force in WW11 as a radar operator. She was posted to the Isle of Wight in 1942.

She married Marlowe on April 25, 1942 and came to Canada in 1946 as a war bride. She marched with the veterans every November 11th and was featured on the CBC National news in November 2020 talking about Remembrance Day during Covid.

They lived on McIntyre Street in a house with no running water until 1961 when they bought "a modern home" on McCannel St.

Jeanne lived in that home for 54 years until she moved to Qu'Appelle House in an independent suite. She then decided she needed long term care in December 2021and was lucky to stay in Qu'Appelle House until January 2022. For the last 3 months she lived in a personal care home, Majestic Manor. She made all of her own choices and was cognizant until the end of her life.

She encouraged her children to further their education and supported and guided them to pursue their dreams. Jeanne came from a family with a long military history and two of her sons, Al (RCAF) and Reg (Army Reserve) continued this career.

She would sit down every Tuesday afternoon and hand write her memoirs. Her son Reg typed them out for her and got copies made for the family. She titled it My Life Story, In my own Words.

Jeanne volunteered in many different community and church organizations in Regina. She was a member of the Monarchist League of Canada and 600 Wing (Regina) Royal Canadian Air Force.

Jeanne was a volunteer with the Regina Food Bank, Meals on Wheels, a neighbourhood canvasser in Coronation Park, a volunteer at Glen Elm school, Prairie Figure Skating Club, Kiwanis Band, Highland Park Home and School Association. Church was a very important part of Jeanne's life. She taught Sunday School in the 1930's in England. She attended St. Michael and All Angels from 1951- 1972 and stepped into the role of Sunday School Superintendent. In 1972 she joined St. James Anglican Church and shortly thereafter started teaching Sunday School and soon became the Sunday School superintendent. Many students benefited from her lessons and remember her fondly, becoming her friend. She was also known to be the Regina Food Bank representative for St. James.

Jeanne was a very active member of the ACW (Anglican Church Women) and went on to become the Deanery President from 1964-1968. She was active in Bible Studies at St. James sharing her wisdom.

The Canadian Bible Society was important to her and she always ordered and delivered the Bible Society readings to all of the Regina churches. She was president well into nineties.

Andrew “Andy” was a family friend who came to Sunday suppers. Five years after Marlowe died Andy asked her if she would like to go and see the Carlton Show Band. They started dating and in 2007 they were married. Andy made her very happy and joined her in volunteer work and church.

Jeanne was a woman who did the best with what she had. She invested in friends, family and her faith. She was organized, independent, stubborn and hard working. She was an inspiration to many. She lived a long life of 99 years and 5 months. The family would like to thank the medical team of the Pasqua Hospital, Ward 4C, especially nurses Christie, Jolene, Emily, Pauline, Jodi, Sarah, Ashley and Dr. Kyle McDonald. You went above and beyond to keep her comfortable on her last days on this earth.

A celebration of Jeanne’s life will be held at St. Paul's Anglican Cathedral, 1861 McIntyre St, Regina, SK, on Monday, April 25, 2022 at 2:00 p.m. She will be buried in Regina Memorial Gardens beside her first husband on their 80th wedding anniversary.

It is suggested that we all wear masks.

For those unable to physically attend, a livestream may be viewed on your device by clicking on the following link.

As per the instructions left by Jeanne; Please wear bright colors. (No black).

In lieu of flowers, donations may be made to the Regina Food Bank, 455 Winnipeg Street, Regina Sk. S4R 8P2 or the Canadian Bible Society, 10 Carnforth Rd., Toronto, ON, M4A 2S4.