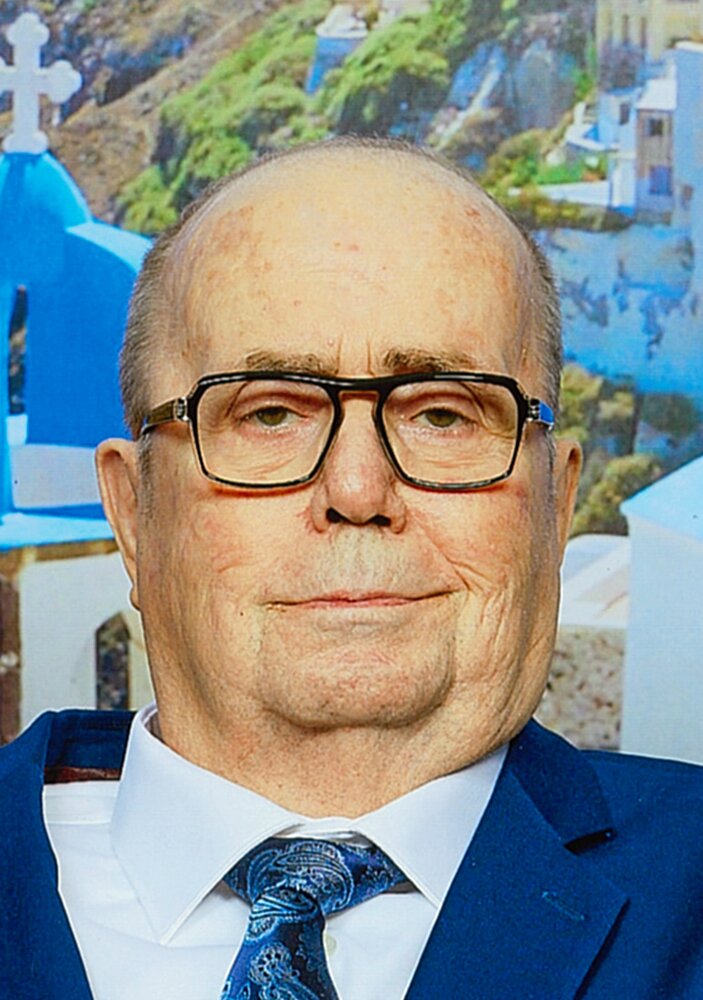 With heavy hearts we announce the passing of George Kolitsas on Thursday, April 21, 2022, surrounded by his loving family. George was predeceased by parents Dimitrios and Sophia; brother John; infant brother Michael; and two sisters-in-law. George is survived by his wife of 58 years Niki Kolitsas (née Pontikes); his children Sophia (Constantine) Vournazos, Maria Kolitsas (Warren) Lang, and Dimitrios Kolitsas (partner Pamela); and grandchildren Nicole, Anthony and Steven Vournazos, and Angelique and Michael Lang. He is also survived by his siblings, Antonios (Dimitra) and Kosta (Mary); his sisters-in-law Voula, Sotiria, Dora (Sotiri) and Olga (George); and numerous nephews, nieces, and cousins.

Born August 15, 1940, on the island of Andros, Greece, George set sail and travelled the world as part of the Greek Merchant Marine working in the kitchen as a purser and cook. In 1960, George immigrated to Canada for a better life; working in Vancouver and Banff as a chef before meeting his wife Niki and settling in Regina to begin their life together. George was an entrepreneur at heart with a passion for cooking. George operated the Georgia Café, partnering with his brother-in-law Charlie and friend Albert, honing his impressive kitchen abilities. Years later, George stepped out on his own and took over the Kitchener Café, where he started experimenting on how to create great pizza. From the beginning George knew a great pizza started with great sauce.  George bought his first pizza oven and began experimenting while working at the Kitchener Café. When George was not experimenting and serving up dishes at the Kitchener Café, he spent hours at the local library researching how Italians made pizza sauce. It was in that moment the idea to start his own pizza business flourished.  In 1970, fueled with the knowledge of great pizza and testing recipes at the Kitchener Café, George approached his brother Kosta to support him in establishing the original Houston Pizza on Hill Avenue. As George’s pizza recipes began to gain a following, George’s brother Tony joined the duo to support the bustling business. Over the years, the buzz for Houston Pizza originated “Regina style” pizza grew. Their brother John moved to Regina and began supporting the brothers at Houston Pizza. Under George’s leadership, the brothers took a leap forward and established the first Houston Pizza franchise in 1979 in Moose Jaw. As the pizza business continued to grow, George and his brother’s purchased Golf’s Steak House, where George made his famous “clam chowder soup” and together the brother’s ran both businesses, treating their longtime coworkers as family.

George will be remembered as a hard-working, generous, open-hearted individual who always dedicated time for his family and community. He lived by his lifelong motto: ‘ena heri voeithai to alo’ – one hand helps another. He was an active member and supporter of St. Paul’s Greek Orthodox Church and Regina’s AHEPA Chapter and helped numerous family and friends to triumph both in personal and professional lives without expectation of return. Outside of his businesses and community, George loved to spend time traveling, hunting, and fishing.

In 2006, George suffered a severe stroke and was faced with a new challenge of overcoming life-altering health challenges. Despite this, George never lost his charm and wit. With the support of family and friends, George continued to enjoy life, spending time with those that mattered most. We are heartbroken to lose his infectious smile and will always cherish our years with him. We know that George is welcomed into Heaven with the same selfless and caring spirit he showered family and friends with his whole life. The family would like to give a special thanks to Dr. Kathy Kontsiotis, Dr. Patrick Duffy, massage therapist Gus Giannoutsos, the many wonderful doctors, nurses, and staff at the Pasqua Hospital, the SHA Home Care Division, and his personal long term caregiver Angelina DeJesus.

Prayers will be held at Speers Funeral Chapel, 2136 College Avenue, Regina, SK, on Wednesday, April 27 at 7:00 p.m.  Funeral Service will be held at St. Paul’s Greek Orthodox Church, 3000 Argyle Road, Regina, SK, on Thursday, April 28, 2022 at 1:00 p.m. under the officiation of George’s close friend Rev. Father Spyridon Vandoros.To view the livestream of the service, please click on the link above which will be made available on the date and time of the serivce.  Interment in Riverside Memorial Park. In lieu of flowers, the family requests that donations be made to St. Paul’s Greek Orthodox Church, 3000 Argyle Road, Regina, SK (https://gocregina.com/donate/); which George cherished and believed in with his whole heart.