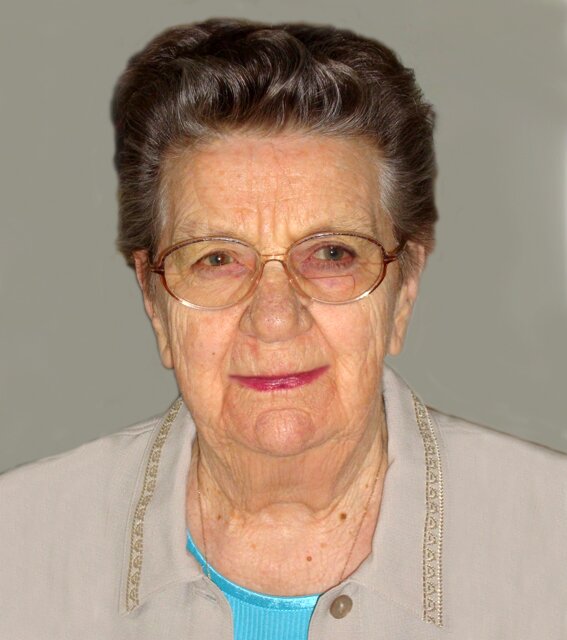 Olga Fofonoff, wife of the late Mike Fofonoff, passed away on Monday, May 30, 2022 on the Palliative Care Unit at the Pasqua Hospital in Regina at the age of 97. She was born in Veregin, SK to the late Anastasia and Steve Sanchuk. This is where she lived until moving to Regina in 2010. Olga loved her career as a school teacher, first teaching for three years in one room country schools in the early 1940’s, followed by 27 years teaching primary school children in Veregin.

In 1978, Olga retired so that she and Mike could tame the "travel bug". They enjoyed many trips to various countries around the world. When not travelling, Olga was very much involved in the Kamsack Hospital Auxiliary, where after 25 years of service, she received a lifetime membership.

As Baba, she enjoyed many hours caring for her grandchildren every chance she had. While living in Regina, Olga was invited to join the Century Club for seniors more than 90 years of age. She thoroughly enjoyed the gatherings pre-covid and made new friends, who she continued to stay in touch with during lock-down. Family was very precious to her and she never missed acknowledging a birthday, anniversary or special occasion. Olga loved to collect anything elephant related. She loved the circus, parades, live theatre, curling, baseball, and music. Olga especially loved dessert-preferably chocolate.

As per her wishes, a graveside service and interment of cremains will take place at the Veregin Cemetery at a later date. The family wishes to thank the Palliative Care team for their exemplary care.

Anyone wishing to make a donation in Olga’s memory may do so to the RM of Sliding Hills # 273, Box 70 Mikado, Sask. S0A 2R0 for the Veregin Cemetery Fund, or the charity of your choice.

Share Your Memory of
Olga
Upload Your Memory View All Memories
Be the first to upload a memory!
Share A Memory