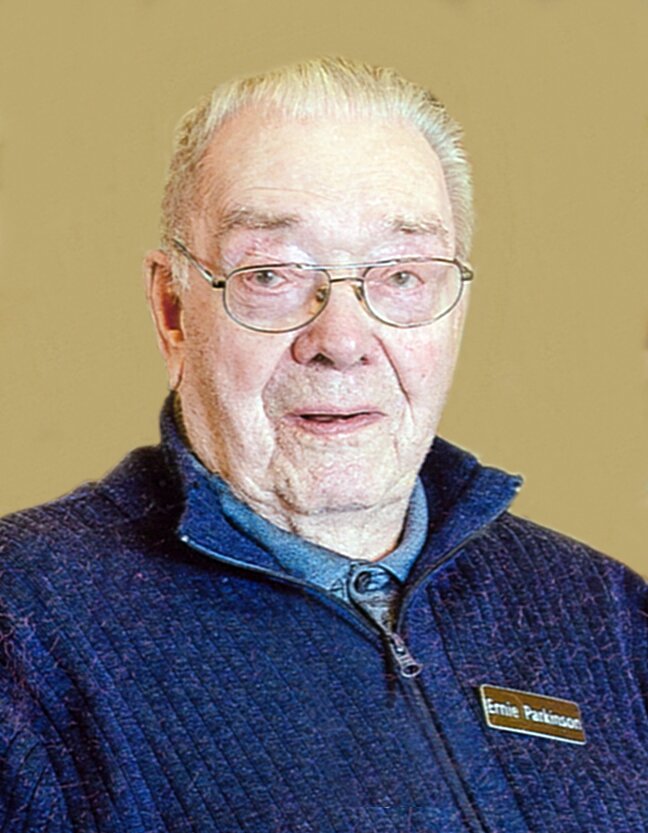 Ernest Henry Parkinson late of Regina, SK, formerly of Langenburg, passed away on Saturday, June 11, 2022 at the age of 100 years. He was predeceased by his parents Walter and Minnie; his spouse Ella; and six brothers and sisters. Ernest is survived by his daughters Ricki (Tom) Jackson, Beverly (Steve) Kesslering; and numerous nieces and nephews.

Ernie was born in the Clumber district near Bredenbury. He grew up on the farm, the youngest of seven children. In 1942 Ernie joined the Royal Canadian Navy. He had several trans-Atlantic crossings escorting convoys from Halifax to Londonderry, Ireland.  After the war Ernie returned to Saskatchewan. He met and married Ella Popp in 1946.  They moved to Flin Flon, MB where he worked in the mine. They returned to Langenburg in 1950, where he worked at the hardware store and also as the town secretary before becoming Post Master, a position he held until his retirement. He was very involved in community life, working with air cadets and was an active member of the Legion. Ernie enjoyed travelling and spending time with family and friends.

The family would like to thank the staff at Victoria Park Personal Care Home for their care and kindness.   A Private Family Service will be held at a later date.