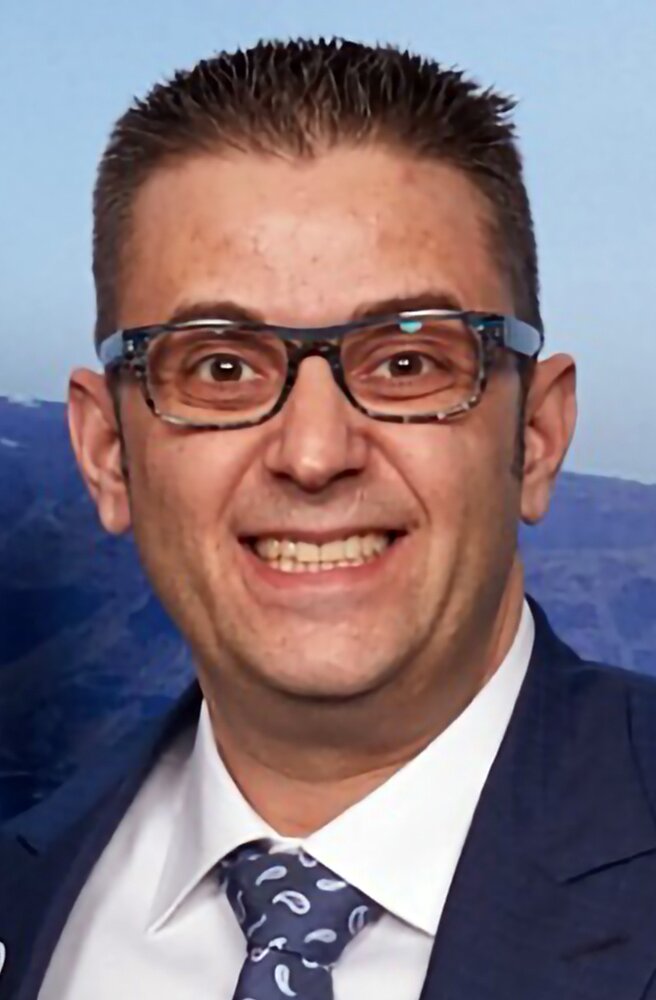 It is with great sadness that we announce the passing of Dimitrios (Jim) Kolitsas on July 6, 2022, at the age of 44 surrounded by his loving family after a long and courageous battle with Glioblastoma (brain cancer). Beloved son of Niki Kolitsas and the late George Kolitsas (2022), brother to Sophia Vournazos (Constantine) and Maria Kolitsas (Warren Lang) and partner Pamela Meek.  He is survived by uncles and aunts, Antonios (Dimitra) Kolitsas, Kosta (Mary) Kolitsas, Voula Kolitsas, Sotiria Pantelopoulos, Dora (Sotirios) Platanopoulos, and Olga (George) Adamopoulos.   He is also survived by nieces and nephews Nicole, Anthony, Steven, Angelique and Michael as well as numerous cousins, godsons, and close friends.  He is predeceased by family members, Dimitrios (Sophia) Kolitsas, Nikolaos (Maria) Pontikes, Georgia Tsoulos, Athena (Kyriakos) Maroudis, John Kolitsas, John Pantelopoulos and Athan McEwen-Maroudis.

Born on July 13, 1977, Jim was the youngest of the three siblings.  Jim attended Sheldon Williams Collegiate where he played football while spending evenings and weekends working in the family business – Houston Pizza. Jim balanced his life with his friends and his work.  He loved both equally.  After high school Jim partnered with his sister Maria to take over as owners of Golf's Steak House in October 1998 from their father and uncles. This is where he learned to grill and bake.  Anyone who has ever tasted Jim’s prime rib would attest to this.  It passed the test of his biggest critic, his father.

In 2001, Jim moved on in his career to take over the Moose Jaw Houston Pizza location. This is where Jim showed his passion for cooking and was always looking to better the recipes at Houston Pizza that his father George had created. This gave the Houston Pizza Franchise a spot in the published book Only in Saskatchewan Recipes & Stories from the Provinces Best-Loved Eateries by Naomi Hansen. Jim was always proud of this as you could tell by the picture of him in the book.

A native of Regina, Jim spent countless hours supporting the local community.  He was an active member of the Greek Community, where he was involved with St. Paul's Greek Orthodox Church.  He also followed his father’s footsteps and became a member of Regina’s AHEPA Chapter, a Hellenic civic and community group. Jim was particularly proud of his involvement and participation in the community fundraising event known by all as "An Evening in Greece".  He would help with the set up, contact sponsors, silent auction items, basically anything the event needed from him.  On the night of the gala, he would always take a special picture with his family.

Jim was a kind and caring person with a big heart and would do anything for anyone. Jim was devoted to caring for his father, George and supporting his mother, Niki – family was important to Jim.  His favourite pass time was having special lunches whether it was with his dad, uncles, cousins, or friends. He had a gift connecting with people of all ages.  Jim always had a smile on his face and would always try to ensure everyone else did as well.

Jim was an avid hunter and fisherman in the provinces’ many bodies of water. When not exploring all that Saskatchewan has to offer, he spent time traveling and exploring the world. He certainly lived his life to the fullest.  He was also an enthusiastic supporter and attendee of many Roughrider games with his late father George.

After overcoming his own struggles, Jim had dedicated the last 8 years of his life to helping and inspiring others through theirs’. He had a real talent for this.  He did this by attending and speaking at conferences, camps and retreats. Jim's faith became more important to him during his recovery which helped him get through his recent battle with brain cancer.

He has touched the lives of many and is loved by many more in the community. Jim will be sorely missed by all. The family would like to give thanks to Dr. Kontsiotis, Dr. Dalkilic, Dr. Baumann, Dr. lqbal, nurse Dorianne Siarkos, Dr. Leong, and the many nurses and staff at the Regina General Hospital floor 5A.  A special thanks to Rev. Father Spyridon Vandoros for providing him guidance through his battle as well as his personal friend and caregiver Angelina DeJesus who has been there for him and his parents for the last 15 years.

The Prayers and Funeral Service will be livestreamed through St. Paul’s Greek Orthodox Church’s Facebook Page. Interment to follow in Riverside Memorial Park. ln lieu of flowers, the family requests that donations be made to either St. Paul's Greek Orthodox Church, (https://gocregina.com/donate/); or the Brain Tumour Foundation of Canada (http://braintumour.ca/ways-to-give/donate-now/).

Share Your Memory of
Dimitrios
Upload Your Memory View All Memories
Be the first to upload a memory!
Share A Memory