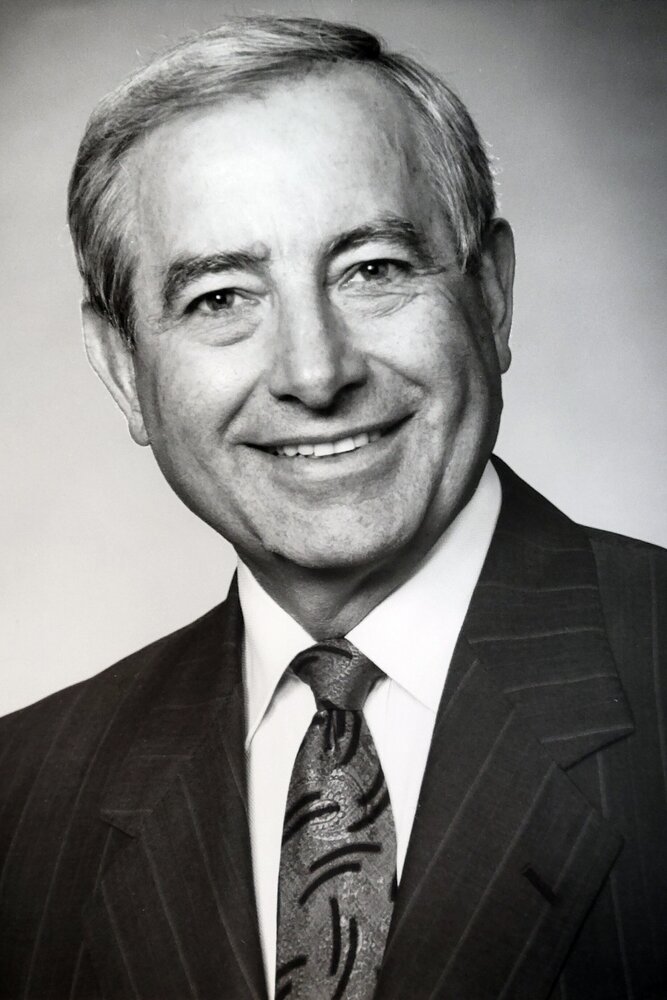 Please share a memory of Joseph to include in a keepsake book for family and friends.
View Tribute Book

Joseph Gordon Wicijowski, L.L.D., F.C.A. B. Comm. of Regina, SK, passed away peacefully at Regina General Hospital on October 13, 2022, at the age of 88. Gordon was predeceased by his wife Ardella in 2008; parents Peter and Stella; sisters Pat Thomas and Nell Aasen. He is lovingly remembered by his son Tim (Laurice) of Regina; their children Taryn (Jordan Baker) of Edmonton, Amelia of Regina and Eric (MacKenzie Van Eaton) of Regina; daughter Wendy Niziol (Ray Phillips) of Vallecito, Colorado, Wendy’s children; Rebecca Niziol of Denver, Colorado, Joseph Niziol (Meghan McWain) of Clear Lake, Texas and Angus Niziol (Amber) of San Antonio, Texas and Ray’s children; Rachel, Janna and Ty; son Stuart (Marlene Boucher) of Regina, Stuart’s children Jarek of Saskatoon and Kasia of Regina and Marlene’s children, Travis and Jessica Brady. Gordon was born in 1934 in Regina in the midst of the depression to recent Polish immigrants. He attended St. Joseph’s School and Campion High School. During World War II he joined the Air Cadets. Gordon continued his education at Regina College and the University of Saskatchewan, obtaining his Bachelor of Commerce degree in 1955. During his studies he met fellow commerce student, Ardella Kiehl. Also, while in university he played basketball for both the Regina Cougars and the Saskatchewan Huskies. Upon graduation Gordon articled at the national accounting firm of Clarkson Gordon & Co. (later, Ernst & Young), and was a medalist for his Chartered Accountant exams in 1958. He went on to establish his own accounting practice under the name Wicijowski, Wenaus & Co. that soon grew to be Regina’s largest independent firm. In 1969 they merged once again with Clarkson Gordon, doubling the size of that firm. Gordon soon became managing partner of Clarkson Gordon in Regina and later for all of Saskatchewan, a position he held until his retirement in 1996. In addition, he served on Clarkson Gordon/Ernst & Young’s national management committee as the western Canadian representative. He was devoted to serving his clients and was always sure to patronize their businesses. His reputation in the accounting profession was second to none. Gordon was elected a fellow of the Institute of Chartered Accountant of Saskatchewan in 1973 and was the first recipient of the Institute’s Distinguished Service Award in 1996, having previously served as President. Gordon served on many corporate and volunteer boards including: University of Regina, Campion College, Potash Corporation of Saskatchewan (now Nutrien), MacKenzie Art Gallery, Saskatchewan Roughriders, Regina Pats, Law Foundation of Saskatchewan, ING Canada Inc. (now Intact Financial), and eleven of its subsidiary insurance and financial companies, Canadian Institute of Chartered Accountants and the Saskatchewan Institute of Chartered Accountants. Gordon was a founding governor of the Law Foundation of Saskatchewan and acted as its treasurer for 37 years. He was an avid sportsman and fan. In 1975 he became part of the ownership group of the Regina Pats. He served the Roughriders in numerous capacities including on the management committee (board), chairing the Plaza of Honour Dinner, and chairing the audit committee for 23 years. Gordon held season tickets for the Riders and the Pats, each for over 60 years. Later in life he was a fixture at the rink, court, pool and theater following the exploits of his grandchildren, often throughout North America. Gordon was a patron of the University of Regina, serving on the Senate and Board of Governors. In 1980 he travelled to China as Chair of the Board of Governors to establish a ground-breaking relationship with Shandong University. He helped raise $20 million for the University in the 1990’s leading the 20/20 fundraising campaign.  In 1997 he was awarded an honorary Doctorate of Laws from the University of Regina. He was a lifelong member of the YMCA and a standout handball and racquetball player. He was also a long-time member of the Wascana Country Club. Gordon received his 60-year pin from the Eastview Regina Rotary Club in 2021. He always led by example and prided himself on being one of the most respected, fair and ethical business leaders and volunteers in his community. During his retirement he was able to spend considerable time tending to his beloved lakeside property at Shore Acres. Following Ardella’s passing, Gordon took on the dual roles of patriarch and matriarch of the family, something for which he will always have our love and gratitude. We wish to thank his neighbours this past year at The Williston at Harbour Landing and his special private caregivers, Emily, Judy, Angie, Debbie, and Kelly, who lovingly cared for him over the past few years.  A funeral mass will be held on Saturday November 12, 2022 at 11am at Blessed Sacrament R.C. Church, 2049 Scarth Street, Regina with reception lunch to follow. Cremation with private family interment in Silton Cemetery, next to Ardella, to take place in the spring. In lieu of flowers, donations may be made to the Wicijowski Family Scholarship Fund, University of Regina https://giving.uregina.ca/pages/donation-pages/gordon-wicijowski The service will also be live streamed and available for later viewing, at this website.

Share Your Memory of
Joseph
Upload Your Memory View All Memories
Be the first to upload a memory!
Share A Memory