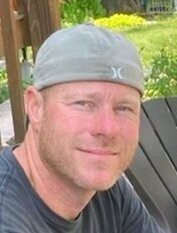 Jason “Jay” L. Bates of Grand Coulee, SK passed away on Thursday, December 8, 2022 at the age of 45 years. He is a beloved father, son, and brother. Jay is survived by his children Taighah Bates Boys; Alaidria and Nolan Bates and their mother Shan Leibel Bates; parents June and Bryce Bates; and sister Erin Bates (Mike Rosychuk).

Jay grew up in Grand Coulee, SK where he attended kindergarten to Grade 8; later being bussed to Regina where he went to high school at Sheldon Williams Collegiate until graduating in 1995.

Jay enjoyed his childhood in Grand Coulee where he rode bikes, built forts and played baseball and hockey.  He loved all sports but his passion was hockey.  As a kid, he spent hours after school and all day on weekends at the outdoor rink.  He played organized hockey in Pense and later in Regina until he was 17.

Jay joined the work force after high school and realized his love of woodworking.  Working with wood became his career and he could build/make almost anything including furniture, cabinetry, and residential and commercial buildings although his favourite was finish carpentry.  He was particularly proud to make the urns for two of his grandparents when they had passed away.

Jay married and returned to Grand Coulee where he built a house and raised his family wanting to give the same childhood he had to his children.  His three kids were his life; he loved them more than anything and was proud of each of them.  He was also a community minded person spending time on the Recreation Board and coaching hockey for several years in Pense.  He was a selfless man and would go out of his way to give a neighbour or friend a helping hand.

The family cabin at “the beach” was a place he loved and could always rest and relax while spending summer days with his family boating, fishing, barbecuing, and visiting with friends and neighbours.  Jay loved the outdoors and planned to go hiking in the backcountry in the mountains.  He was an avid fisherman, he had the knack… usually catching more and/or bigger fish than whoever he happened to be fishing with that day.  He found a particularly good pickerel hole not far from the cabin that he proudly named “Jay’s Bay”.

Jay had many friends and buddies he made over the years through his sports and work.  He will be remembered for his sense of humour, selflessness, and hearty laugh.

Donations can be made to support Jason’s children’s future education through the Jay Bates Family Trust, Community Support Account at any Conexus Credit Union or as an e-transfer to jaybatestrustfund@gmail.com.

Share Your Memory of
Jason
Upload Your Memory View All Memories
Be the first to upload a memory!
Share A Memory