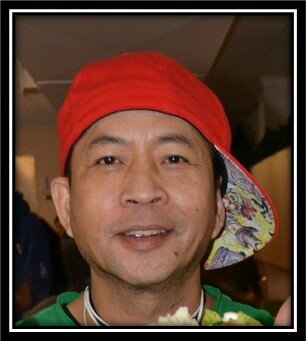 Tin Hwte passed away peacefully on Saturday, December 10, 2022, in Regina, Saskatchewan.  Tin was predeceased by his parents. He will be missed by family, close friend Robert “Bob” Hughes, Cognitive Disability Staff, as well as many friends he met along his journey.

Tin was born in Myanmar on April 4, 1969. Tin left his hometown of Hpa-an, Myanmar when he was 17 years old to join the All Burma Students Democratic Front (ABSDF) to become what he defined as a “Freedom Fighter”.  When he was 23, Tin endured extensive injury to his leg due to gunfire.  He was transported by boat to Thailand and spent two years in the hospital rehabilitating. After Tin was discharged from the hospital, he returned to ABSDF, unfortunately he endured another leg injury forcing him to return to Thailand.

While recovering in the hospital, Tin found love and decided not to return to the war. Around 1994, he was encouraged to travel to Bangkok and meet with the United Nation Refugee Agency (UNHCR). He and his wife were granted funding to reside in Thailand and were accepted as political refugees by Canada. In 1996, Tin and his family flew to Lethbridge and later moved to Calgary, Alberta. In 2000, Tin’s relationship with his wife ended and he later relocated to Saskatchewan, where he eventually made Regina his home.

Tin’s life was not without its struggles, but Tin was a fighter. He often spoke about the heartache he felt about not having contact with his family back in Burma or his son. Tin was always willing to lend a hand and never backdown from a challenge. Tin was an avid storyteller and often shared his experiences as a Freedom Fighter.  He loved to play guitar and sing traditional Burmese or songs he wrote himself.  Tin was a member of the Free Spirit Band, Theatre Group, Social Group and Work’Inn Odd Job Squad.  He was a trusted and respected volunteer at the Regina Mental Health Club.  Tin will be remembered for his kindness, sense of humor, zest for life and laughter.

Share Your Memory of
Tin
Upload Your Memory View All Memories
Be the first to upload a memory!
Share A Memory