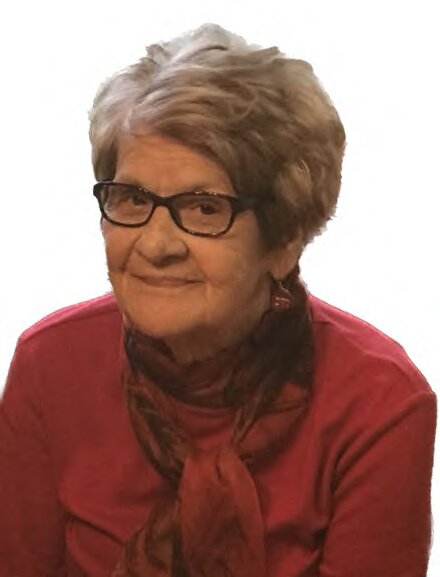 Mary Platana passed away peacefully at St. Ann’s Home, Saskatoon, SK on  Wednesday, January 18, 2023 at the age of 92 years. She was born on the family homestead near Welby, SK. In February of 1952, Mary married Harvey Platana. They both worked at Sears until she had their first child at which point, she became a stay-at-home Mom. They raised three girls: Janine, Joanne, and Janette. Mary eventually returned to Sears and finished a 30 year career. Mary loved to watch sports. In fact, her favourite day of the week was Saturday, because she could watch “Hockey Night in Canada” and cheer on her Montreal Canadiens. Mary was predeceased by her parents, Elie and May DeCorby; her husband, Harvey; her brothers Eddie, Henry, George, and Joe; and her sisters Irene and Hilda. She is survived by her daughters, Janine, Joanne, and Janette; seven grandchildren, Amanda (Kevin), Lindsay (Monique), Drew, Marie, Paul, Roz, and Nick; four great-grandchildren, Lauren, Eabha, Finn and Fern; two sisters, Edith McGeough and Sister Elizabeth DeCorby; as well as numerous nieces and nephews. Interment in Riverside Memorial Park Cemetery, Regina, SK will be held at a later date with Deacon Terrence Platana. Those so wishing may make donations, in memoriam, to St. Ann’s Care Home, 2910 Louise St, Saskatoon, SK S7J 3L8.

Share Your Memory of
Mary
Upload Your Memory View All Memories
Be the first to upload a memory!
Share A Memory