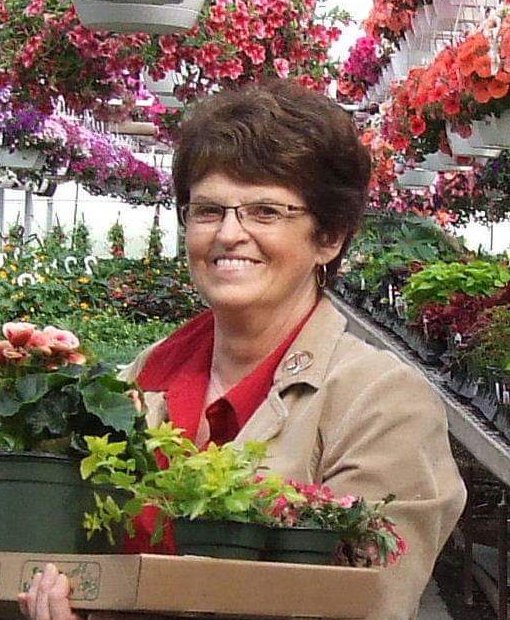 Deanna Delores Tuchelt (Schultz), age 78, passed away peacefully surrounded by her loving family, at the Pasqua Hospital on Sunday, May 5, 2019.  She was born in Rose Valley, SK, September 10, 1940, the eldest of four children. Most of her childhood was spent on the family farm, north of Cupar, SK., where she fondly reminisced memories of her youth, stooking hay, milking cows and sharing an occasional squirt with the cats, her favorite farmyard animals and all the adventures she had riding horses to school were just a few.

She left home, moving to the city of Regina where she worked at SaskTel for a number of years.  It wasn’t long before she met the love of her life.  Ernest captured her heart and the two were married on June 7, 1963.  Deanna devoted her time and energy to her husband and family of three children, Michelle, Jason and Danielle.  She loved to keep busy, her hands were rarely still, sewing, knitting, crocheting, ceramics, gardening.  Through the years her creativity continued and she expressed her talents beautifully in everything she did.  Deanna took great pride in her home and yard and nothing would hold her back, not even her illness.  She always said she would cut back, not plant more than a couple pots.  Last year the count was fourteen!  Deanna got such joy from her “critters” in the back yard, especially the birds and squirrels.  Watching out the patio window was like a scene from a Disney movie.  She had a loving fondness for her pets too, but, cats were her favorite and spent many hours visiting at the cat cafe’s in the city, especially after her beloved cat passed.  In her last few weeks, she kept busy, knitting a stack of small blankets for the cat beds at the Regina Humane Society.

Through the years, Ernest and Deanna travelled many destinations but, especially enjoyed the winter months they spent in Texas and Arizona with friends.  Coffee and lunch dates with the girls, shopping, and visiting, she loved them all but, her favorite was spending time with her Sunshine, granddaughter Edie.  The two were inseparable and had such fun together, moments that won’t be forgotten.

Left to cherish her memory is her loving and devoted husband of nearly 56 years, Ernest, as well as daughter Michelle (Warren) Howse of Avonlea, SK, son Jason (Wancy Wu) of Calgary, AB, daughter Danielle Tuchelt White (Kristopher White) and her precious granddaughter, her Sunshine, Edith Tuchelt White of Lumsden, SK. Deanna is survived by her brother Richard (Margaret) Schultz of Emerald Park, SK, brother David (Stephanie) Schultz of Cupar, SK, sister Sandra (Ron) Schimnosky of Calgary, AB, brother in-law John (Joyce) Tuchelt of Lumsden SK, sister in-law Blanche Tuchelt of Watson, SK along with many nieces, nephews, cousins and friends. Predeceased by her parents, Richard and Helen Schultz of Cupar, SK, mother and father in-law Robert and Martha Tuchelt of Regina, SK, brother in-law Verner Tuchelt and sister in-law Evelyn Tuchelt Piccioni of Regina, SK, and brother in-law Robert Tuchelt of Watson, SK.  A very special thank you to the doctors and nurses of the Palliative Care Unit for their care and compassion during this difficult time, to the Palliative Care volunteers, who are angels and eased some stress by the kind gestures they offered, to special homecare nurses Travis and Scott for their continuous care and friendly visits every week, and the oncologists and nurses at the Allan Blair Cancer Centre for their expertise over the past six years of treatment, thank you! A private family celebration of Deanna*s life will take place at a later date. In lieu of flowers, those wishing to do so may make donations in memoriam to the Pasqua Hospital Palliative Care Unit or the Regina Humane Society.

Share Your Memory of
Deanna
Upload Your Memory View All Memories
Be the first to upload a memory!