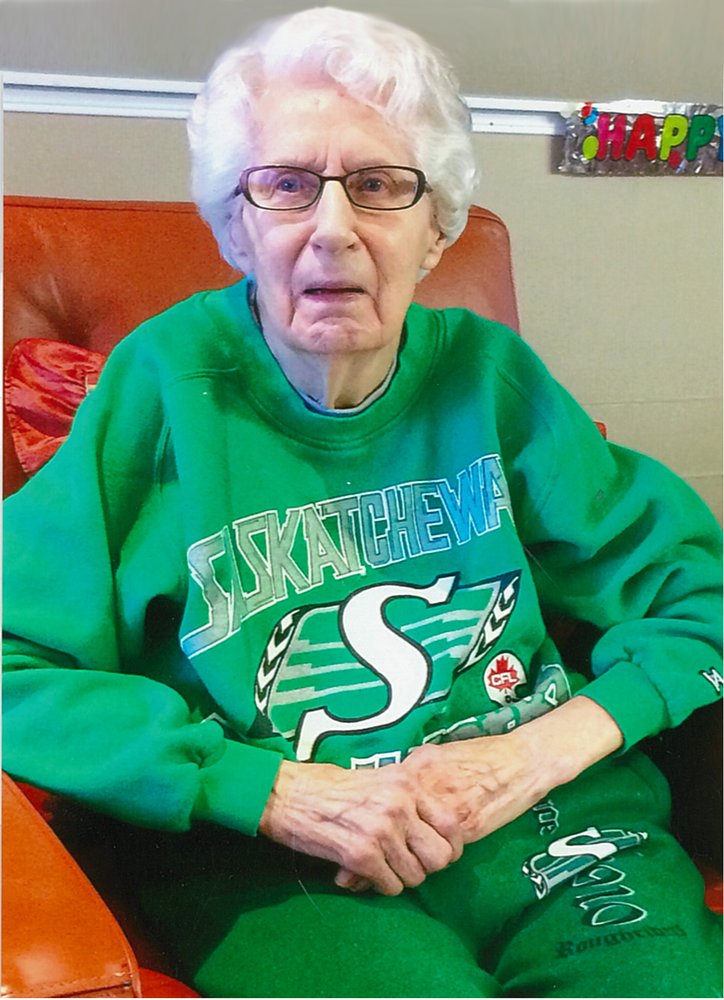 Evelyn Dorothy Chesney was born on January 7, 1923 to Hermie and Benjamin Chesney on land the family was farming near Waldron, Saskatchewan. It was a home birth attended by a midwife. Evelyn remembers a childhood of working on the farm caring for numerous animals, planting, hauling water from the lake and weeding the garden. She remembers much preferring outside work to the domestic tasks indoors; although she remembers endless mending. She recalls swimming in the slough or the dug-out, herding the cows with her siblings, and picking Saskatoon berries. Rare Sunday picnics at Good Spirit Lake and the Qu’Appelle Valley where she could swim and play with her sisters and brothers were relished. She taught herself to   yodel – a skill that never failed to delight her nieces and nephews many years later.

At age 7 she started “plain” school in Waldron with her younger brother Donald. Sometime later, after a move, Evelyn and her siblings attended Hilltop School. This was a small one room country school. Attending school dances at Hilltop, Good Hope and Crescent schools were always special occasions, as were the Christmas concerts where she performed and sang carols. At age 15 Evelyn left school because the family could not afford further education.

As a young adult Evelyn worked for wages as a farm helper. She also relates a story of journeying north to Hudson Bay Junction by tractor, before the snow fell, or with horse and sleigh, to cut logs to augment the family’s income. The work crew stayed for up to two months at the logging camp. For two seasons Evelyn cooked out of an old caboose for her Father and a crew of five to eight brothers and other workers.

The economic hardships of the Great Depression had a profound influence on Evelyn. A major life theme was her drive for financial security and independence. She states that the most important aspect of her life was her career. She says she was grateful to have a job and she protected her employment. She was immensely proud of gaining full-time employment with Saskatchewan Telephone at age 17 or 18, and she stayed with the utility until retirement. She began as a file clerk, and then moved to the key punch machines in billing. Later, she was promoted to a supervisory role over a crew of office workers. Employment offered the ability to purchase her own home – a significant feat for a single woman at the time. She also purchased her vehicles – the first being a red and white 1953 Bel Air Chevrolet. Evelyn retired from “Sask Tel” in the 1980’s after 36 years devoted service. She was an active member of the “Pioneers”­­­­­­­­­­­­­­­, a social club of Saskatchewan Telephone retirees. Complete retirement didn't suit her; however, she operated as a Tour Guide with a tour company for some time post-retirement. These tours took her to many states south of the border including Missouri, Oregon and Alaska.

Evelyn’s interests include the Saskatchewan Roughriders football team. She attended many home games, and was an avid fan. She cherishes the landscape of North Saskatchewan and the wildlife there. She learned to knit at age 10 and became a master knitter augmenting her retirement income selling her creations at local craft fairs and flea markets. Evelyn was also an accomplished sewer. Travel was always something she looked forward to, and she made many trips including a tour of Australia, New Zealand, and Fiji, many trips to Hawaii, and a visit to Poland in 1974 with her sister Hermie to connect with distant family.

Evelyn is held close to the hearts of her nieces and nephews. We particularly cherish memories of her in her leopard skin bathing suit sitting on the hood of her red and white Bel Air, walks with her in her leather jacket with the long fringes, trying so hard to yodel like she could.

As per Evelyn’s wishes, there will be no funeral service.

Share Your Memory of
Evelyn
Upload Your Memory View All Memories
Be the first to upload a memory!