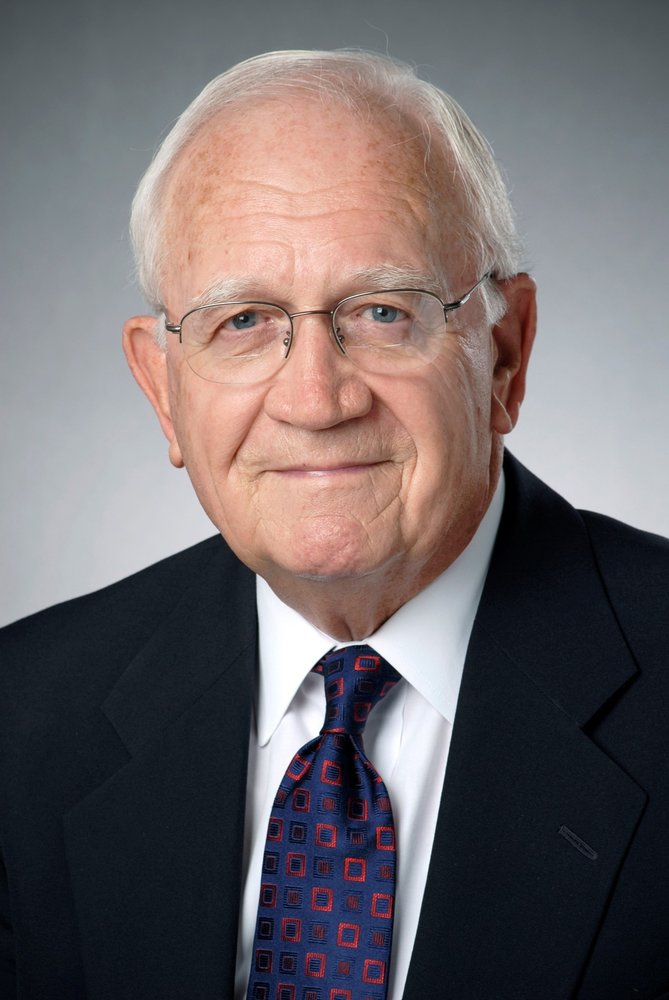 William Francis Ready passed away peacefully after a sudden illness on the morning of Monday, July 8, surrounded by his loving family. He was 92.

Bill was born on April 21, 1927 at Forgan, Saskatchewan, the eldest of four children. He attended elementary school in Valparaiso and high school in Tisdale, and graduated from the University of Saskatchewan with a Bachelor of Arts degree in 1948 and a Bachelor of Laws degree in 1950. Bill practised law in Nipawin and Melfort before moving to Regina in 1953 to join the prestigious law firm of Thom, Bastedo and McDougall. He later became the senior partner and the firm became known as McDougall Ready (now McDougall Gauley). Appointed a Queen’s Counsel in 1967, Bill served as president of the Regina Bar Association and the Canadian Bar Association (Saskatchewan). He was a Bencher of the Law Society for six years, a member of the Law Society Mentor Program and a frequent lecturer at the Law Society Bar Admission Course. Bill received the Distinguished Service Award from the Canadian Bar Association (Saskatchewan) in 1990. In 1999, after an exceptional legal career of nearly 50 years, Bill retired from active practice. He was granted a Senior Life Membership in the Law Society of Saskatchewan in 2001.

Throughout his life, Bill was committed to making a difference in the life and work of the community. He was president of the Regina Symphony Orchestra, president of the Gyro Club of Regina and chair of the Regina Citizens’ Advisory of the Salvation Army. In 2005, Bill was appointed a life member of the Salvation Army Advisory Board of Regina. He was an active member of Lakeview United Church for nearly 40 years and served as chair of its church board.

In 1967, Bill was elected to the Regina Public School Board and served on the Board for 11 years – two years as vice chair and two years as chair. A number of innovative initiatives were implemented during his tenure, including the Community School Program, the Ukrainian Language Program, the Program for the Visually Impaired, the Pre-school Program for First Nations Children and the School Tutor Program for the Learning Disabled. In 1984, the Regina Board of Education honoured him by naming a new elementary school after him – W.F. Ready School.

Bill was further honoured in 1989 when the University of Regina conferred upon him a Doctor of Laws degree (honoris causa) in recognition of his exceptional service to the community.

On June 4, 2019, Bill was awarded the Saskatchewan Order of Merit in recognition of his commitment to service, to education and to the province.

Bill truly lived his life to the fullest. He was genuinely interested in people and enjoyed every opportunity to engage in conversation and share a story. Bill had a wonderful sense of humour and a broad range of interests. At the age of 70, Bill, his son Ken and his grandson Donald hiked the historic Chilkoot Trail from Skagway, Alaska to Bennett Lake in Yukon Territory. He enjoyed skiing, golfing, gardening and summers spent at the family cottage at Kenosee Lake. In recent years, Bill especially enjoyed the companionship of his dog Sidney.

Family was the centre of Bill’s life and his favourite times were those spent in the company of his wife, children, grandchildren and great-grandchildren. He was immensely proud of them and of their accomplishments.

A humble man of integrity and honesty, Bill was a gentleman in every sense of the word. He will be greatly missed.

The family is grateful for the care and compassion extended to Bill and to them by the doctors and nurses of the Regina General Hospital and by members of the Regina Qu’Appelle Emergency Medical Services and the Regina Fire and Protective Services.

In lieu of flowers, please consider a donation to a charity of your choice.

Share Your Memory of
William
Upload Your Memory View All Memories
Be the first to upload a memory!