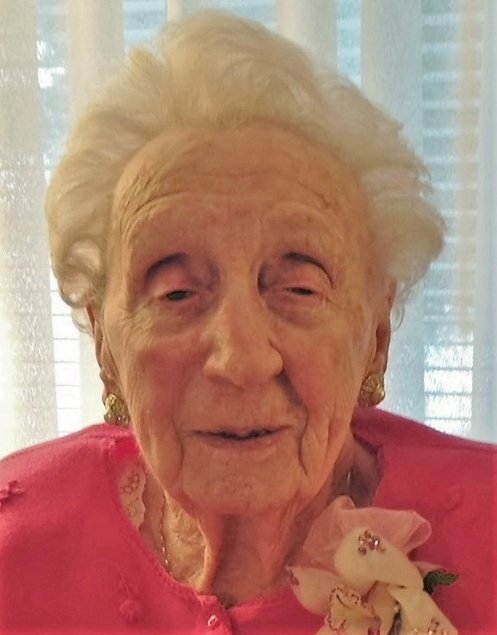 It is with great sadness that her family announces the passing of Ruth Margaret McKillop. She passed away Saturday, November 23, 2019 at the age of 103 years.

Ruth was born on a stormy January 6, 1916, the third daughter of Thomas and Emma Pridmore of Arcola Saskatchewan.  Ruth’s elder sisters Joyce and Bessie were born in England and Ruth’s upbringing was as English as could be maintained on the Saskatchewan prairies. Ruth’s parents were avid gardeners who beautified their surroundings and truly embraced the prairie landscape. Their love of both nature and their newly adopted home was passed along to Ruth and her sisters.

Ruth grew up an athletic child with a gift for music. Independent thinking, tolerant and liberally educated, she enjoyed the pleasures of growing up in a close-knit community. She met the love of her life very, very early, as a mere girl in school. Ernest Arthur McKillop was always the only man for Ruth.

In due course, when current affairs, prairie droughts and finance permitted, Ruth and Ern were married, on another stormy winter day February 11, 1943.  When Ern returned from military service, Ruth happily assumed the role of house-wife. Three children, Donald, Richard and Penny followed closely. Her husband and her children were the focus of Ruth’s life.  She took great joy in looking after her family, in providing that safe, soft place to fall. She and Ern instilled in their children their own moral code and were comfortable with their life decisions.

Ruth was a quiet woman, preferring to remain in the background.  No one was more supportive of family than Ruth. She attended curling, social and business functions with Ern, and games and performances with / for her children. Mom could always be found sitting quietly in the audience as her children took on some new challenge.  Ern and Ruth had a close group of dear friends who supported each other through life’s good times and bad.

Ruth enjoyed a good game of bridge and played regularly with a neighborhood foursome. She was a gifted seamstress and needle worker and an accomplished cook.  She supported her church community, serving with the UCW for many years. But her first love always was her immediate family, and her very large extended family.   Large gatherings of McKillops at the family cottage at Kenosee were a great pleasure for her. Family gathered for food and conversation were so important.  Ruth was also a compassionate care-giver for her mother, until Gran’s passing at age 102. Nothing done for family was ever an imposition.

With Ern’s passing in 1995, Mom‘s responsibilities grew.  As her health began to fail she remained firm in her desire to live at home. With the help of daughter Penny and an unfailing, dedicated team of caregivers, she was able to stay at home to the end. Many, many thanks to the ladies of the team: Chris, Merle, Audrey, Deborah and Marjorie and most especially to Ellen.  Mom could not have lived her final years in comfort without your help. She so appreciated your care.

A Service of Celebration will be held at Lakeview United Church, 3200 McCallum Avenue, Regina, SK, on Monday December 2, 2019 at 1:00 p.m, with Reverend Jean Morisset officiating.