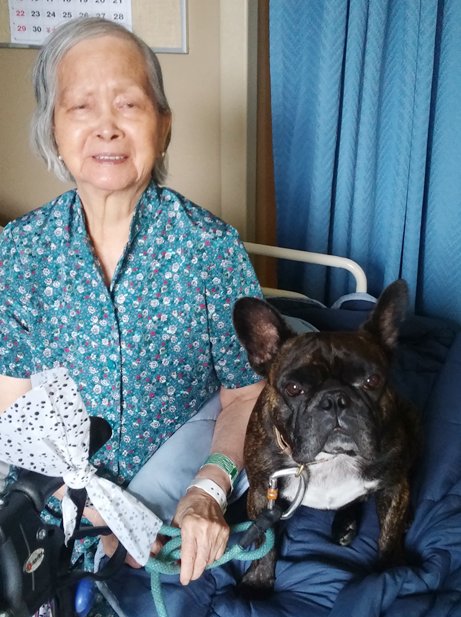 Mrs. Nellie Yue Oi Wong was born on October 6, 1924, in China, the province of Kwong Deong, county of Hoy Sun, town of Doe Foke, and village of Num Toon. She married George Henry Wong in August of 1954 in Hong Kong. On October 10, 1954, they both moved to Canada to reside in Regina, SK. George Wong owned and operated Galaxy Restaurant, a Chinese restaurant on 11th Avenue.  After 2 years, he sold the restaurant and opened a grocery store on 15th Avenue. They both worked very hard. In 1958, they bought another store, Modern Grocery at 1100 Victoria Avenue. As a family of seven, they lived above the store, where the children helped out in the family business, and did well in school. In 1973, Nellie and George retired and sold the store. The family continued to reside in Regina. In 1984, October 25, George Wong passed away. He now lies in the Regina Riverside Memorial Park Cemetery. In 2018, Nellie moved to Calgary to be closer to her children. She lived in an assisted living residence in Chinatown, where she has always wanted to live. As a born-again Christian, Nellie was a member of the Regina Chinese Alliance Church. She was well liked by the members of her community, customers, neighbors and had many friends.  Nellie is survived by her five children, Lillie, Filler (Ingrid), Dorthy, Richard and Pearl and twin granddaughters, Hannah and Christina. A private graveside service will held at Riverside Memorial Park. Flowers are gratefully declined. To view the livestream of the Graveside Service please click on the link to Speers TV at the top of Nellie’s Tribute Page on Tuesday, May 19, 2020 at 2:00 p.m.

Services for Nellie Wong
There are no events scheduled. You can still show your support by planting a tree in memory of Nellie Wong.
Visit the Tribute Store