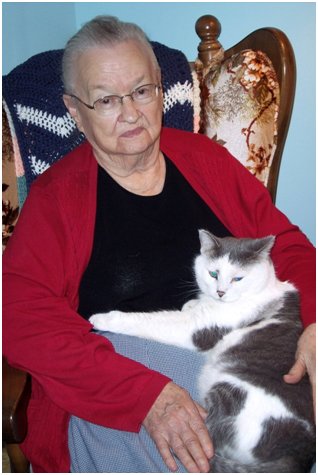 Doris Eileen Keller was born to Erick and Dora (Overby) Moe at Lisieux SK on August 11, 1925.  She grew up on the family farm and attended the local school.  As a young woman, Doris moved to Vancouver where she worked briefly before meeting and marrying her first love Robert Radom in September 1946.  Their first home was on a farm near Lisieux SK.  During this time, their two daughters were born; Shirley in 1949 and Beverly in 1950.  In 1954 they relocated to a farm at Boharm SK later moving to Moose Jaw where son Richard was born in 1956 and another daughter, Barbara in 1958. During this time, Doris worked as a cook at the Harwood Hotel where she added to her delightful culinary skills.  Family and friends will fondly recall her delicious Butter Tarts, delectable Poppyseed Cake with Brown Sugar Icing and wonderful home cooked meals.  Sadly, Bob passed away in 1965.  Doris continued working at several jobs to provide for her family.

In 1967 she married Clifford Stianson, who farmed south of Moose Jaw.  Unfortunately Clifford passed away just seven weeks after their marriage. She continued living in Moose Jaw until 1974 when she married Fred Keller and moved to Regina and later Yorkton.  After Fred’s passing in 1997, her advancing age and failing health required Doris to relocate to Prince Albert and later to Birch View Home in Birch Hills SK where she resided until her peaceful passing in the early morning hours of June 24, 2020.

Doris grew up in a God-fearing home.  She  loved God and His true Way and made her choice to serve Him as a young woman. This heart choice was her focus and strength throughout her entire life. Doris and Fred loved caring for God's servants and counted it a real privilege to host meetings in their home both in Regina and Yorkton.  Doris was a wonderful Mother and was a good example to her children, grandchildren and great grandchildren, all of whom she loved dearly.

The family would like to extend their appreciation to the wonderful staff at Birch View Home who lovingly cared for Doris during her seven years with them.

To view the livestream of the service please click on the link above.